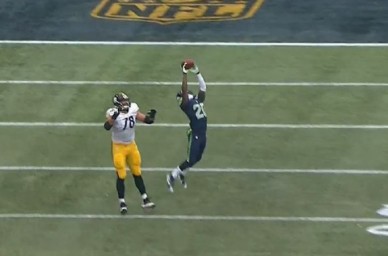 Tomlin has evolved into one of the NFL’s most aggressive coaches in football. He often coaches off a gut feeling not logic, which can be good at times and bad at times. We saw all of it Sunday afternoon (good and bad) in the Steelers 39-30 loss to the Seahawks. The aggressiveness through the air from Ben Roethlisberger and the play calling saw their passing game look unstoppable at times but it also handed Seattle momentum far too often (Turnovers/Misses) when they had none.

When Seattle had no life, the Steelers would always find a way to give them some and it was a recurring theme starting with the botched fake field goal call that led to a Landry Jones interception and the Seahawks scoring 7 points off the turnover.

It played out this way all day.

Than the man who doesn’t live in his fears, kicks a field goal from the three yard line down five with three minutes left and no signs his defense was going to come up with another stop to get the ball back and a chance to win it.

However, where the Steelers lost this game wasn’t with the dumpster fire that was the Steelers pass defense, it was with the offense and play calling in the third quarter.

The Steelers being too aggressive halted them from being able to take control of the game when Seattle’s offense had three and outs on three of their first four possessions in the second half.

After a 25 yard Chris Boswell field goal that put the Steelers up 21-14, the Steelers defense forces a three and out. The Steelers get the ball back with four minutes left in the third quarter and on the second play of the drive, Roethlisberger is intercepted that leads to a short field for the Seahawks who get within one (21-20, missed extra point).

The Seahawks could not stop the Steelers through the middle of the field on intermediate passes but the entire second half the Steelers offense kept looking for a knock-out punch and never got it.

On the Steelers ensuing drive after the Seahawks cut the Steelers lead to 21-20, a 3rd and 1 at their own 47, Roethlisberger goes for a home run pass to Bryant that just misses. They hit that pass Haley looks like a genius, but this was a low percentage call when the short and intermediate plays were there all game for the Steelers.

The Steelers are forced to punt, but the defense again comes up with a second straight three and out as the Steelers offense gets another opportunity to take control of the game. The first play from scrimmage again see’s Roethlisberger go for another home run pass down the left side to Antonio Brown who stumbles and Richard Sherman picks it off. Moments later Seattle then goes up 26-21 as a shootout is underway with Wilson torching the Steelers D in fourth quarter, outscoring Pittsburgh a combined 25-12 in the second half.

The Steelers offense put up huge yards and 30 points but laid an egg when the game was there for the taking.

The Steelers had a pass/rush ratio of 59/14 in the loss……Pittsburgh fell to 1-3 this season when Ben Roethlisberger throws the ball 35 or more times in a game. In the seven games (6 starts) Roethlisberger has appeared in this season, Pittsburgh is 0-3 against teams currently above .500 and 4-0 against teams below .500….The Steelers have dropped to 30th in the NFL in allowing 283 passing yards per game……

A team with an ongoing “dumpster fire” in the defensive secondary isn’t going anywhere anyway. They’re currently 30th in the NFL in passing yards allowed per game and that’s not going to get it done. Maybe this offseason they should try living in their fears if it gives them the focus to actually address the freaking problem instead of putting their heads in the sand yet again and just hoping for better results. They could spend every pick in the next draft on defensive backs and not one of them wouldn’t be addressing a real need.

I didn’t mind the fake, it was the execution that sucked.

A friend of mine hit a deer the other day said he looked just like Landry Jones before he puts his helmet on. No clue in the headlights.

39 points the last time I checked is an issue- did something change?