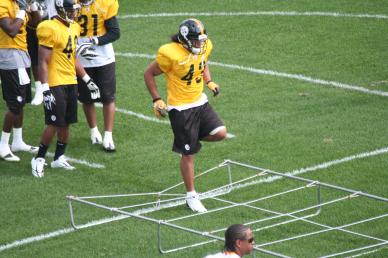 By Mike Bires
PITTSBURGH _ There were two bits of good news at Steelers headquarters Monday.
One was the prediction by linebacker Lawrence Timmons that he’ll play Sunday in Chicago.
The other was Troy Polamalu saying that his injured knee doesn’t need surgery.
The news about Polamalu was especially encouraging.
“It’s the best-case scenario,” said Polamalu, the all-star strong safety who’ll be out three-to-six weeks with a sprained knee ligament.
So for the time being, T.P. will be replaced by T.C.
That would be Tyrone Carter, who’s started 41 regular-season games in his 10-year career, including 10 with the Steelers.
“Any time T.C. has ever stepped in, he’s done just as good a job or better,” said Polamalu, who was injured late in the second quarter in the Steelers’ 13-10 season-opening win over Tennessee as he scrambled for the football after a blocked field goal.
“And with Lawrence Timmons coming back, I don’t expect any drop-off (on defense).”
Obviously, Polamalu is well versed on the company line when it comes to injuries.

“The standard is the standard for the 11 men on the field for us,” coach Mike Tomlin always says when a starter goes down.

That’s been especially true on defense over the years.
For example, in the 15 games back-up nose tackle Chris Hokes has started in place of Casey Hampton over the years, the Steelers are 14-1.
In the 10 games Carter has started for either Polamalu or free safety Ryan Clark, the Steelers are 8-2.
“I would be foolish to stand in front of you guys (in the media) and say it’s won’t be different without Troy, and you’ll all would be even more foolish to print it,” Clark said. “T.P. is best safety in football, bar none. And when you lose a guy like that that it’s hard and it’s tough. So he’s going to be missed.
“But as Coach Tomlin always says, the standard does not change. Last year, one of the strengths of our teams was that whenever we lost a player (to injury), we’d plug in someone else and didn’t miss a beat. So we expect T.C. to come in and make plays.”
Carter agrees.
“I can’t get caught up trying to emulate Troy Polamalu,” Carter said. “Troy is one of a kind. You can’t find another safety like him in this league. But if you look at my track record, you’ll see that I can get the job done.”
Last year, Polmalu led the Steelers with seven interceptions. Carter was second with three.
Carter’s first pick last year came in his first start, the 23-6 win over the Redskins in Washington.
In his second start in the 31-0 rout of the Browns in Cleveland, Carter intercepted two passes, including one he returned 32 yards for his first career touchdown.
“Starting is not new to me,” Carter said. “I know what to expect. And I expect to get the job done.”