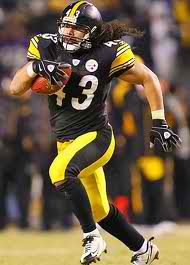 By Dale Grdnic & Will DePaoli
PITTSBURGH — If the Pittsburgh Steelers win their final three games, they will be 13-3 — the club’s best regular-season record for head coach Mike Tomlin and also since going 13-3 for former coach Bill Cowher in 2001 and 15-1 in 2004.
If the Steelers accomplish that goal, they will enter the playoffs as AFC North division champions and earn a first round bye with the No. 1 seed in the AFC.

Things could not have went better for the Steelers on Sunday and the table is now set for them to take the division and conference lead with a victory in San Francisco Monday night.
The Baltimore Ravens (10-4) stumbled Sunday night, getting thumped by the San Diego Chargers (7-7), 34-14, paving the way for the Steelers to control their destiny for the division crown and No. 1 seed.
Baltimore’s loss wasn’t the only significant development for the Steelers. A Houston Texans (10-4) loss was also extremely beneficial to the Steelers due to the Texans owning a head to head tiebreaker.
New England (11-3) enters Monday with the best record in the AFC at 11-3, but the Steelers hold a pivotal tiebreaker, defeating New England in week 8.
The Steelers though limp into San Francisco far from full strength. Center Maurkice Pouncey and wide receiver Emmanuel Sanders won’t play, while linebacker James Harrison is serving a one game suspension.
The biggest storyline is the health of Ben Roethlisberger who is officially listed as questionable with a grade 1 high ankle sprain.
Following Saturday’s practice, there was growing optimism around the team that Roethlisberger will give it a go and start. As of tonight, expectations are he will play.
The Steelers know the importance of earning a first round bye but they also know it’s not everything.
Strong safety Troy Polamalu, who likely will play Monday at San Francisco despite an injured right hamstring that he rehabbed all week, believed a first-round bye and additional rest was important but not at the top of the list.
“You want to be as healthy as possible, but you also want to be playing well,” Polamalu said. “So, it’s nice to get some time off, but it’s not everything. You really need to have everybody playing well to be successful in the playoffs.”
Third-year player Ziggy Hood, who has returned to practice this week after suffering a right groin strain against the Cleveland Browns, is expected to start at left defensive end for the Steelers. He noted that while additional time off is a luxury, it’s not always something that a team can afford to take.
“Well, it’s always a goal to get that bye, but if it doesn’t happen we’ll keep working hard and try to play our best road games,” Hood said. “So, it’s something that you shoot for, winning your division and getting a first-round bye in the playoffs, but it’s not everything.
“We just want to be healthy and playing as well as we can when the playoffs begin. And I think we’re playing pretty well right now. We still have three games to go, but if we win them and go 13-3 in the regular season that’s really a great accomplishment. But it really only matters what you do after that.”
Some players still get fired up for Monday Night Football matchups because “they’re the only game on TV,” many Steelers said, and a game between the Steelers and Niners is somewhat historic as far as the NFL is concerned. But don’t count Hampton in that category.
“It’s a Monday Night game, so it’s big like that, but I really don’t get into the history of it with the 49ers and all that,” Hampton said. “I’m not into that stuff, but it’s a big game. It’s the only game on, and everybody else can watch you play. But as far as anything else, it’s just another game for me.
“We have a couple guys who are out and a couple more who should play, and when somebody doesn’t play another guy has to step up. We’re not going to change anything, probably unless it’s Troy. We probably do a few different things if he’s not in there. But everybody else, it’s all the same.”
Notes: This is the 20th meeting in the all-time series between the Steelers and 49ers, franchises with six and five Super Bowl trophies, respectively, with the Niners holding a 10-9 edge. … The Steelers won the last matchup, 37-16, Sept. 23, 2007, in Pittsburgh…..The Steelers clinched a playoff berth tonight.