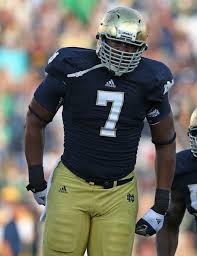 Round 2-3 Analysis
The Steelers went into this draft determined to retool their front seven and the team didn’t have to think twice about selecting Notre Dame defensive end Stephon Tuitt (6-5, 304) with the No. 46 overall selection, again bypassing the receiver and cornerback position.
The Steelers would then add running back Dri Archer (5-8, 173) with the No. 97 overall pick.
Tuitt started 29-of-35 games at Notre Dame, finishing with 127 tackles (59 solos), 21.5 sacks for minus 163 yards, 25 stops for losses of 176 yards and 27 quarter-back pressures.
In 2013, Tuitt posted a career-high 50 tackles (24 solos), leading the Irish for the second consecutive year with 7.5 sacks and had nine tackles for losses totaling 62 yards. Tuitt was credited with 13 quarterback pressures.
The Steelers were among the teams who had a first round grade on Tuitt.
“We feel we got a steal in the second round at our pick,” defensive line coach John Mitchell said of Tuitt. “If this guy had probably been healthy (hernia injury going into 2013 season) coming out up to his junior year, he probably would have been among the top-10 guys drafted,” Mitchell said.
Like Ryan Shazier, the Steelers feel Tuitt can come in and contribute early. Internally both are looked at as immediate starters.
“We are getting quality players and quality depth,” D-coordinator Dick LeBeau said of the Steelers first two selections. “Both of these players are going to get a lot of playing time.”
As for Tuitt Mitchell loves the physical traits.
“He’s a guy that can do a lot of things for us,” Mitchell said of Tuitt. “He can push the pocket, play the run, he can get off blocks and he can get to the ball.”
Mitchell is a coach who is normally very conservative with his words when discussing young players but he seems pretty pumped to be working with Tuitt. “I don’t care what scheme you play,you have a guy 6-5, 310 who can run, stay on his feet, be physical and you have a pretty good football player,” Mitchell said.
The Steelers starting defensive line projects to be Cam Heyward and Stephon Tuitt on the ends with Steve McLendon at nose tackle. Cam Thomas will be a swing player who the Steelers feel can play end and nose. The team still needs to add at least one more serviceable player.
ARCHER A RISKY PICK
The Steelers come out of the first three rounds without taking a cornerback or wide receiver. The team is trying to come off that they are deeper and better at both positions than people assume.
Under offensive coordinator Todd Haley, the Steelers have long sought to have a scat back in the backfield who is a difference maker. They tried Chris Rainey and hoped Larod Stephens-Howling would fill that role last season prior to being injured.
Archer has the potential to be a Darren Sproles type player when the ball is in his hands. He is lightning fast running a 4.2 forty and has been clocked at 4.18. “He’s going to be able to be a dynamic football player with the ball in his hands,” running backs coach James Saxon said. “The kid can run. The kid is a special football player like i said with the ball in his hand.”
Archer could turn out to become a special player but few scat backs like him ever become a Darren Sproles. It’s a risky pick to make in the third round.