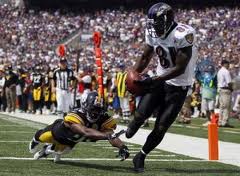 By Dale Grdnic
PITTSBURGH — The Pittsburgh Steelers are second in overall defense in the AFC to this week’s opponent, the Baltimore Ravens, but that status wasn’t reached by virtue of the club’s usually stingy run defense.
The Steelers have been rated No. 1 in pass defense in the NFL since reaching that level in Week 3 and have allowed 171.1 yards per game. While that might be amazing to most, it should be noted that three players who were an afterthought at the beginning of the season have made a huge impact.
Cornerbacks William Gay, Keenan Lewis and Cortez Allen didn’t even know if they would be on the team at this point, but fifth-year player Gay has started every game except the opener and played solidly. Lewis, in his third season, comes on when the Steelers go to the nickel defense and plays to the outside.
Gay moves to the slot in those situations. And when the Steelers are in the dime or even seven defensive backs, rookie Cortez Allen joins the cornerbacks, while third-year player Ryan Mundy is in there with other safeties Ryan Clark and Troy Polamalu. Ike Taylor, the other cornerback, could be playing the best football that he’s ever played in his ninth NFL season.
“Guys have stepped up in the secondary and at linebacker and on the D-line where young guys have made a big difference,” Gay said. “Ike, he’s playing very well in the secondary, but I look at it like he’s been doing this. He’s been great every year, in my mind, and he’s not worried about stats or Pro Bowls.
“What’s important to Ike is winning a Super Bowl. That’s the only stat we all care about, Super Bowl wins. So, Ike and all the players here want to get back to the Super Bowl and win it this year. People don’t remember all the stats or if you made the Pro Bowl and didn’t win it all. People remember Super Bowls.”
It’s no secret that the Steelers’ secondary has been the most-consistent unit on the team and most healthy as well, while the linebacking corps, D-line and offensive line have been hit pretty hard by injuries this season. All Gay wanted to talk about was the team’s success and the team’s record.
Taylor agreed, but he gave props to some individuals as well.
“I think we’re doing good so far, but we can get better,” Taylor said. “No, we haven’t gotten beat too much, but we definitely can be more consistent. There’s a lot of things you might not think about or see out there.
“But we can be more consistent. Keenan, Willie Gay, the rookie, Cortez, and me have played pretty well as a unit. And we’ve done a lot of good things. We’re playing with a lot of confidence right now, and we’re playing well as a unit.”
The real surprise is Allen, a fourth-round pick from The Citadel. The more high-profile rookie corner, third-rounder Curtis Brown, hasn’t gotten on the field. Allen has gone from just special teams to also playing on passing downs.
“Things have been going pretty good, being able to contribute with the team and help us get a big win last week was great,” Allen said. “I was happy to be a big part of it. The veteran guys and the coaching staff did a great job helping me prepare and learn the things I needed to learn to get on the field. But I had to perform once I got out there, and I think I’ve done all right.
“I couldn’t have done anything without guys like Ike and Willie Gay. They’ve been great. Troy, Ryan Clark, Ryan Mundy, all those guys back there. They’ve been a huge help to me ever since I got here. And Coach (Carnell) Lake, he’s been working closely with me from the beginning. So, I’ve been able to improve a lot off the field, watching tape and in he classroom, as well as on the field.”
Taylor, Allen said, has been especially helpful and supportive from the outset.
“I think Ike’s playing as well as any corner out there,” Allen said. “And he definitely works really hard at it. Just look at him. He’s in great shape, and he puts in the time off the field, too. He’s been a great mentor, and I really appreciate it. That’s what people probably don’t really know about him.
“They just see what he does on the field, but off it he’s been a big help to me and the younger DBs. His work ethic and technique and what he does to improve himself, the work he puts into his craft, you can’t help but learn from him.
So, I really appreciate what he’s done for me this season.”

And with the way the secondary has played as a unit, the Steelers continued to be ranked among the best defenses in the NFL.