Steelers – Wednesday: Suggs amped up as usual in wake of Sunday’s showdown 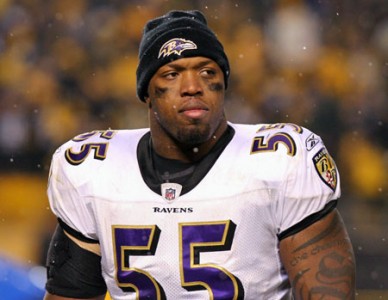 By Dale Grdnic
PITTSBURGH — Terrell Suggs is the Baltimore Ravens’ all-time leader in sacks and forced fumbles, and it seems like he’s recorded at least half those against the Pittsburgh Steelers.
Suggs, who was on a conference call Wednesday with the Steelers’ media, tallied three sacks and two forced fumbles in the Ravens’ 35-7 season-opening slamming against the Steelers. The rematch between the Steelers (6-2) and Ravens (5-2) is Sunday at 8:20 p.m. at Heinz Field.
“You know, it’s Ravens-Steelers, and that still gets everybody’s piss hot,” Suggs said. “(But) we know what this game’s about. We know what this is. I mean, (expletive) it. Let’s do it.”
Suggs added that he and the Ravens look forward to their games against the Steelers, and he especially was hopeful that No. 86, Steelers wideout Hines Ward, would be able to play after missing last week’s game with an ankle injury.
“It wouldn’t be Baltimore-Pittsburgh without him,” Suggs said. “I’d be really disappointed if 86 doesn’t play. … (No.) 55 (Suggs) will be on the field, even if I’ve got one shoulder, but 86 has got to play. I need him personally to play, so my piss will definitely be hot. … I definitely want to see my good friend Hines Ward play this week.”
Ward noted that he’ll definitely play this week and has a surprise for Suggs.
“I’m not going to miss this game,” Ward said. “I’ll bring him some candy. It’s mutual respect. I saw him during the offseason, and he was highly upset that we beat them in the (AFC divisional playoffs), but the guy’s a beast. He created havoc for us the first game, so we definitely have to contain him.
“But the two teams respect each other. It’s not like I dislike the guy that much or I hate him, but he’s a great ball player. … I probably could have forced it and played last week, but I didn’t want to push it. (And) we need to win our division game against the Ravens and next week at Cincinnati.”
Madison Square Garden is considered to be a Mecca for basketball. Suggs made reference to that venue with an NFL slant.
“I consider Heinz Field my Madison Square Garden,” Suggs said. “In my eyes, if you’re an opponent and want to go into a hostile environment, what better place than Heinz Field. I’m definitely the bad guy, and I think throughout the league I don’t think there’s a player that they hate more than me.
“But I love that. Like I’ve said, I love playing at Heinz Field, even though the fans hate me. Everything about this game, they bring it. They’re a big part of this game. And we’re even looking forward to hearing that song in the fourth quarter (Styx hit Renegade), so it’s going to be fun.”
Ward responded to that comment as well.
“It’s going to be a special night,” Ward added. “Our fans are going to be riled up, because their fans in Week 1, that was a playoff atmosphere. So, hopefully, our fans will be there on Sunday night, and let’s have that same environment and atmosphere. As players, this is one that you don’t want to miss.”
One player who was not there for the Steelers’ opener with the Ravens is left offensive tackle Max Starks. He was not re-signed until Oct. 5, four games into this season, and the Steelers are 4-0 since then. Starks likely will be matched against Suggs more often than not.
“I’ve always thought the highest of Max,” Suggs said. “I’ve always thought Max was really good. I was surprised when he was let go, so I’m glad he’s back. He’s my enemy, but even enemies can show respect. So, I have a tremendous amount of respect for Max.
“This is the only team I would say that we have our hands full with as far as the pass and run alike. They do both pretty well, so this is a hated rivalry. They’re built for us, and we’re built for them. And I think we’re the only two teams that can play each other the way that we do.”
Starks appreciated the compliment, although he certainly was surprised by it.
“We’ve had some classic matchups, Terrell and I, and those battles usually go back and forth,” Starks said. “I’d like to think I ended up on the winning side more often, but one sack by him could turn a game around. That makes him look like a great player, and he’s a great pass-rusher … one of the toughest I’ve had over the years. So, I respect him as a player. Like him, not so much.”
Starks said he and Suggs trained together in Arizona during the offseason, but you won’t catch Steelers quarterback Ben Roethlisberger spending any time with him or talking to him.
“I’ve always respected those guys, but I’m not a trash-talker,” Roethlisberger said. “They can say what they want to say, but it’s all a matter of going out and playing. I consider them to be one of the best defenses that I’ve played against. (And) Max and Suggs is always a good matchup.”
With the NFL’s top defenses taking center stage Sunday night, Heinz Field certainly would qualify as a hot spot for football.
“You’ve got to play good defense in this league to survive, if you don’t have the pretty boy from up north (Tom Brady from New England),” Suggs said. “If you don’t have him, then you better have a pretty good defense.
“And you all showed even that won’t get it done for you. If you’re 32nd in defense, you’re not going to beat a pretty good team at all.”
That’s why this game should be most interesting.