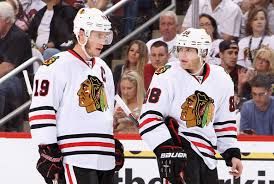 The Chicago Blackhawks have forced a Game 7 in the Western Conference Finals with a 4-3 win in Game 6 over the Los Angeles Kings and Patrick Kane took over in the third period, setting up Duncan Keith for the game tying goal at 11:34 of the third period and Kane netted the game winner with 3:45 left in regulation to put the Blackhawks ahead 4-3.
Kane had 2 goals, 1 assist in the win and the Blackhawks are now 13-0 in Games 5-6-7 the last two post-seasons. This is a special group that rise to the occasion.
Facing elimination the last two games, Kane has gone out and collected 2 goals and 5 assists.
What continues for Chicago is their stars coming up big in clutch situations and that brings me to the Penguins. Kane and Toews might be lesser players than Pittsburgh’s Evgeni Malkin and Sidney Crosby in some eyes but those two are just so much more mentally tougher and they elevate their games in the playoffs.
In 93 combined playoff games since the 2010 post-season, Sidney Crosby and Evgeni Malkin have combined for 5 game winning goals.
Patrick Kane and Jonathan Toews have combined for 8 game winning goals this post-season and a combined 15 game winning goals since the 2010 playoffs. Said it weeks ago, Kane and Toews are a special breed. They have that Clutch and IT factor that the Penguins stars just don’t have.