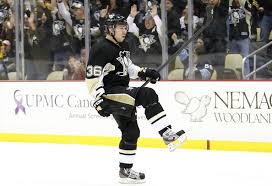 STOCK UP: JUSSI JOKINEN
Matt Niskanen is not the only Penguins pending free agent in position to cash in this summer on the open market for a variety of reasons. Despite his decline in play, Brooks Orpik will also have the chance to net a big contract and will be coveted by several teams, and one Penguins forward has gone a bit under the radar.
In a forward group that lacks elite talent, Jussi Jokinen is being looked at by rival executives as one of the top 5-8 forwards who could hit the open market this summer.
Jokinen is third in points (16-25-41) among all pending unrestriced free agents this summer, behind only Jaromir Jagr (48 points) and Thomas Vanek (47 points). Jokinen’s 12 even strength goals is 4th among potential free agents behind Jagr, Vanek and Colorado’s Paul Stastny.
With the ability to play center, wing and in the midst of a bounce back year, is Jokinen set for a pretty good pay day? An NHL executive and agent weigh in on what Jokinen’s market value could be.
WEIGHING IN ON JOKINEN’S VALUE
Jokinen is in the final year of a three year, $9 million contract, and one senior advisor of an NHL team agreed that with a strong playoff run, Jokinen’s market value could be in the 4 year, $16 million range (give or take a few million less or higher) this summer, but did express some caution about Jokinen, saying he see’s him suited as a complementary player on a skilled line, hence a second or third option.
“I like him, ” the NHL team executive said. “The track record is there of fitting {in} well with skilled players.” I’d put him top-10 (among free agent forwards), {but} not top-5,” the executive said. One concern the executive said he had with Jokinen is he doesn’t feel he can carry a line. “He’s found a niche in Pittsburgh as a third option,” the executive said on Jokinen being on a line with Evgeni Malkin and James Neal.
“If you sign him to be your No. 2 center and go-to-guy on a line, you could be treading in dangerous waters.”
As expected, the agent I surveyed projected a higher number for Jokinen, believing Jokinen’s market value could be worth close to $5 million per season (I have my doubts) with a deep Penguins run this spring. When I said I need a number, he came back with a projection of 4 years, $18.75 million based on his belief that the market is going to be set for 20 goal scorers to start costing $4-$5 million per season in coming years.
The consensus from talks with people around the league is Jokinen is putting himself in position to get a three to four year deal this summer worth over $3.5 million per season and could very well find a team that gives him close to $5 million per season.
Jokinen will be intriguing to teams but someone is likely to overpay for him and any deal for Jokinen in the $4 million range will be risky. This is a streaky player who had a stretch this season where he had 1 goal in 25 games.
Jokinen, though, has found himself in a great spot in Pittsburgh where it will be interesting if his past struggles in Carolina weigh on him in possibly resigning in Pittsburgh for what likely would be much less to keep playing in a good situation where there’s little to no pressure on him.
The Penguins have decided for now to wait on resigning any of their key UFA’s, namely Brooks Orpik, Matt Niskanen, Jussi Jokinen, and let things play out. Jokinen only counts $2.1 million against the salary cap for Pittsburgh and it’s hard to imagine the team being interested in any deal over $3 million per season were they decide to try to resign Jokinen.
TOP FREE AGENT FORWARDS
Thomas Vanek, Ryan Callahan, Matt Moulson, Marian Gaborik, Paul Stastny, Jaromir Jagr, Jarome Iginla, Jussi Jokinen, David Legwand, Radim Vrbata, Daniel Alfredsson

JuJu to return vs Chiefs