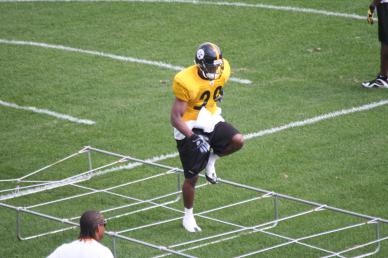 By Dale Grdnic
LATROBE, Pa. — Mike Tomlin has preached about position flexibility since he was hired as the Pittsburgh Steelers’ head coach more than two years ago, and second-year defensive back Roy Lewis appears to epitomize that player.
Lewis is listed as a second-year cornerback on the Steelers’ roster, but he noted that repetitions on both outside spots, as well as free and strong safety, should make him more valuable when the final 53-man group is developed.
“Coach Tomlin puts a lot of emphasis and pressure on second-year players like myself to take that next step in their development and really show what we can do,” Lewis said. “There’s no question that it’s tough to learn everything about all four positions in the secondary, but I’m coming along pretty well.
“The thing is, it takes time, but I’m getting a better understanding about what this defense is about just by getting reps there every day. The OTAs were one thing, but this is really where things happen. You can learn a lot in camp, and I’ve learned something different every day so far. And I like being versatile.”
It certainly helps Lewis, competing with third-year pro William Gay and veteran Deshea Townsend for that cornerback spot opposite Ike Taylor, that with knowledge of every spot in the secondary he is extremely valuable when the Steelers go to five and six DBs.
Rookies Keenan Lewis and Joe Burnett are two rookie corners the Steelers are high on, but Roy Lewis believes that he’s a little ahead right now.
“Just being a little older and a little more experienced, that makes a big difference,” Roy Lewis said. “They’re learning on the fly, just like I was last year, but they’re very talented. Whomever makes this club, the Steelers are going to get some good DBs. That’s why it’s such a good competition.”
Tyrone Carter and Ryan Mundy back up Ryan Clark and Troy Polamalu right now, but Mundy has been inconsistent. So, that’s where Roy Lewis comes in.
“Hey, I’ll play wherever they want me to play,” Lewis said. “I’m just trying to make the team. So, I’m learning everything I can, and we’ll see what happens.”
Bumps And Bruises
A couple more guys were added to the walking-wounded list, as tailback Willie Parker remained out with back spasms. but Tomlin said it wasn’t serious. The same for wideout Limas Sweed (tight hamstring) and Casey Hampton (knee), who did not finish practice, so Tomlin said they’re day-to-day.
Center Justin Hartwig (right big toe) continues to practice on a limited basis, but he could return next weekend after the first preseason game. The only other players who have been out for an extended period are running back Mewelde Moore and wideout Martin Nance (hamstring strains) and offensive lineman Darnell Stapleton (knee surgery).
Stapleton watched practice from the top of the hill near the dorms, as he iced the knee, and said he hoped to be back at practice by the time the regular season begins with the Tennessee Titans Sept. 10 at Heinz Field.
11-on-11, Team Work
Hines Ward got behind the linebackers and spun away from the DBs for a long catch and run off a Ben Roethlisberger toss to open the first team session.
Rashard Mendenhall made a nice,
juggling catch on a screen pass that was tipped a bit. A few plays later, Mendenhall split out left and was wide-open down the left sideline, as there was no safety help from Derrick Richardson.
Wideout Mike Wallace and tight end David Johnson also had a couple good catches each, but wideout Dallas Baker just didn’t have that extra gear to catch up with a well-thrown deep ball from Charlie Batch.
Baker made up for it a short time later with a slick catch in front of cornerback William Gay. Baker is among a group of young, tall and fast receivers, but he’s probably the slowest in the group. However, he’s also been around the longest.
Third-team quarterback Dennis Dixon got a shot against the first-team defense and nearly threw an interception on first down, but cornerback Ike Taylor came across to knock the ball down.
He made a nice play, but probably should have picked it instead of just smacking it away.
Oh, Those Cleveland Browns
A new T-shirt was seen among the 7,000 or so fans in attendance Sunday. A couple each had a shirt that said: “Beating Cleveland is so easy” on the front. And on the back, it read: “A Caveman can do it.” Several Steelers players and coaches commented on it.