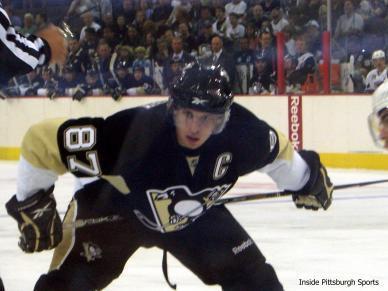 Sidney Crosby has felt the effects of a left knee injury he suffered in Game 7 of the Stanley Cup Final all summer but Crosby will be able to begin his full training regiment next month.
Rest has been the best cure for the injury and he is near 100% health.
Rangers head coach John Tortorella is pushing hard for the Rangers to sign puck-moving defenseman Sergei Zubov. Zubov has been in talks with a number of teams including the Blue Jackets, Blues, Devils and Red Wings.
Columbus and St. Louis have significant interest in Zubov but both teams are near their cap ceilings.
On the trade front, the Blue Jackets have approached the Sharks, Panthers, Penguins to gauge interest in
winger Jason Chimera. The asking price is way too high and Pittsburgh has absolutely no interest in taking on Chimera’s contract.
* The Phil Kessel situation is connected to head coach Claude Julien. The two sides have not seen eye as the Bruins explored moving Kessel last summer.
Kessel, 21, had 36 goals last season but is not viewed as a Bruins kind of player by some high ranking officials in the Bruins organization.
With no arbitration rights and offers sheets being very rare the past two summers, here are four options highly regarded Boston Globe Hockey writer Kevin Dupont puts forth.
* Cut a one-year deal, accepting only a slight bump over his 2008-09 wages, and use it as a bridge to arbitration as of next July 1. If he popped in another 36 goals or more in 2009-10, he could ring up the Causeway cash drawer for $5 million per year or more next summer. Remember, the players who scored more than Kessel last year will average $6.5 million in the coming season.
*Take something akin to David Krejci money (three years/$11.25 million), forget about finances for 36 months, and come to the table in the spring of 2012, ideally with a more mature and proven overall game.
* Force his way out of town, either by requesting a trade or refusing to sign, leading Chiarelli to deal away a non-performing asset (probably at the post-Olympic trading deadline).
*Wait for a Group 2 offer sheet, of which there have been none this summer, nearly three weeks into the free agency process.
A veteran forward has approached the Penguins about a training camp invite. Will have more on Monday.
Bill Thomas is exploring all of options right now. He has the option of returning to Pittsburgh but Michel Therrien valued him more than Dan Bylsma.