Sykora still on the Penguins radar, despite the Fedotenko signing 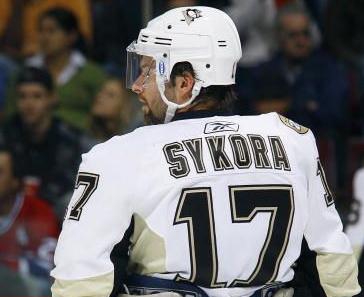 Penguins still interested in Sykora but is the interest mutual?
Talks with Ruslan Fedotenko went on for a week and the two sides discussed a number of concepts regarding a new contract and the two sides were able to settle on a one year deal at a reduced salary.
The moves leaves the Penguins $2.957 million in cap space.
One reason many insiders believe the Penguins will still add a few more players is because a few trades are expected as the Penguins have been involved in trade talks throughout the league.
The Penguins remain in the market for a defenseman and are in on Nick Boynton and Jay McKee but the price will have to work with each player.
One defenseman they showed interest in is now off the market as Shane Hnidy signed with the Minnesota Wild.
The team has been in on forwards Taylor Pyatt and Ales Kotalik but both players are looking for atleast a two year deal.
One player the Penguins remain interested in is Petr Sykora. Ray Shero mentioned at his press conference “we will pick up talks next week.”
The two sides have held discussions but no offer has been made. Sykora was in discussions with the LA Kings and Vancouver Canucks recently.
I’m getting a vibe from Sykora’s camp that he’s not that interested in returning and wants to explore all options. One source said “there may not be a spot for Sykora in the top 6” and that will weigh on his desire to come back.
We’ll see where this goes next week.