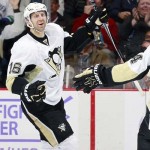 Now that Eric Fehr is healthy and playing with his new Penguin teammates, he is giving the club exactly what it wanted: good two way play with occasional scoring and penalty kill ability in a bottom six forward role.

That’s exactly what the doctor ordered for the Penguins this offseason. And now that the doctors have done their best on his elbow, the Pens are benefiting the way they expected.

So why do some Penguin fans want to change that already?

As a precursor, let me state in advance I realize what I am about to write may be a minority view amongst the Penguin fan base. Being immersed in the sports talk radio world you get exposed to the most microwaved and hyperbolic reactions via tweets, emails, phones, calls etc.

So granted, it’s a limited response that I’m going to describe. But I’d like to nip it in the bud before this becomes…you know….”a thing.”

NO! ERIC FEHR SHOULDN’T BE ELEVATED TO SID OR GENO’S WING!!!!

There. I wanted to get that out early.

Since Fehr has scored twice in his two games with the Penguins (including an absolute beauty in Vancouver Wednesday night) I’ve gotten a few emails, read a tweet or two, and heard at least one on air discussion about trading David Perron and/or Chris Kunitz so Fehr can be moved up to the Malkin line.

Kunitz actually looks like he is settling in on the third line. And while I’ve stated my disappointment in Perron in no uncertain terms and endorsed his departure, he’s at least been more of a positive the last two or three games. And if he is moved, that hole should be where Daniel Sprong ought to play if he is kept in the NHL. Sprong is a skilled player who needs to play with other skilled players to be successful.

Fehr was brought here to provide scoring DEPTH to the team. It’s hard to be considered “depth” if you are on the team’s top line (which the Malkin line certainly is right now). And that depth would be undercut if Perron and/or Kunitz were moved because of the perceived luxury of elevating Fehr.

Fehr was brought here to be good on the penalty kill. Which he has been. As evidenced by his two short-handed goals and Pittsburgh’s 8-for-8 mark while a man down since his debut (for the record, it was 18-for-18 before he got healthy too).

Fehr was brought here to bust his ass on defense and help wear down opposing scorers on other teams. Worrying about offense primarily isn’t in his job description. It would be if he got bumped up to the Malkin or Crosby lines.

“You want to score every game,” said a smiling Fehr after the 3-2 win in Vancouver Wednesday. “But you just want to play the right way and battle hard. Instead of thinking about scoring just be thinking about creating chances and being on the right side of pucks.”

Yup. Perfect. That’s it. Most generic hockey sound bite ever. But for what the Pens should want out of Fehr, no truer words have ever been spoken.

It’s common to see reactions like this from fans in all sports. When your favorite team gets unexpected production from a new player, a natural instinct is to assume your club got a diamond in the rough. Your hope is that your club can get more out of this guy than anyone thought. That’s why you got him late in the draft/free agency. Or that’s why he came out of nowhere in training camp. So, sure, call for the GM to be as reactionary as you are and demand that he cast aside older &/or more expensive guys you’ve grown tired of criticizing.

It’s one thing when fans do that. But when team executives listen or fall into the same trap themselves, that’s when problems occur.

For example, NFL team “X” drafts a nifty, undersized slot receiver in the fourth round and he does surprisingly well as the third guy. So X lets one of its starters go to save cap room that next offseason. The news guy gets a promotion. But now when he’s blocking more often on first and second down, he’s not so good. When he’s working outside instead of exclusively the slot, he’s not getting open downfield.

Similarly with Fehr [hide], you brought him here to be a third or fourth liner. A penalty killer. A defensive plus. And an occasional scorer. Let’s not go calling for Jim Rutherford to start moving puzzle pieces around in the name of future Art Ross Trophy winner Eric Fehr.

Plus, we’re talking about the Penguins here. In a month there may be so many injuries Fehr may be having to double shift for both Sid and Geno! His newfound bundle of fans may get their wish of a promotion for #16 out of necessity.

To reiterate, this is just me reacting to what is likely a small segment of Penguin fans reacting positively to an unexpected punch from a new addition. That’s great. But the best way to enjoy the ride with Fehr right now is to pump the brakes. Let him be who he is. And who the Pens brought him here to be in the first place.[/hide]

Dupuis to the hospital.

On a separate note, I think Lovejoy has impressed.

Defense isn’t sexy but it does win championships. I actually thing the overall vision for the team is excellent. Defense first mentality produces less goals but the GM loaded us with skill over 4 lines making it impossible to shut this team down. Having two checking lines with grit means that the opposition only have to shut Crosby/Malkin down. They’ve been shut down in the past and will in the future. Having Crosby/Malkin playing 200 feet means that if a team loads up its shut down players against them, then they don’t get the bang for the buck as Crosby/Malkin… Read more »

The feeder says Zatkoff has 3.93 goals against average against the oilers in one start against. How many goals were scored? I just can’t get the math to work out…

You people bitch about Benz, but at least he writes multiple articles each week.

what do you mean, “you people?”

Who is bitching? We dont need to agree with the content do we? I mean it drives discussion and that’s what matters no?

Multiple articles that suck and are always negative isn’t anything to be excited about. We could all write these same garbage articles that he gets paid to write.

Soooo, team has been living off of depth all year… Fehr gets back and looks good… fans wonder about him in the top six… this will destroy our depth???

I am not advocating him in the top six but based on the pre-season claim that the line are built on pairs and interchangeable parts on the otherside leads me to believe that he may get a look and the fact that the depth contributions were there before he showed up has me thinking they will be okay if he does. Just a thought

all i know is there were several minute stretches in that vancouver game where the puck did not go within 20 feet of either goal. it’s 1995 NJD all over again. watching teams exchange puck possession in the neutral zone is not my idea of time well spent. the NHL and the pens way of playing sucks.

What? Do you know what a period is? Hapended? What the hell is that?

I’ve been sitting on this for awhile but with the Sprong situation it’s a good time to bring it to light, Pittsburgh fans often reference the Redwing model as an example and defense for why the Pens should thrust young players into the lineup. Dylan Larkin made Redwing history earlier this season by being the 1st teenaged player(18-19) to dress for the Redwings in 30 years, Steve Yzerman being the last to do so.

did we already blow his elc?

I mostly agree even phenomenol forwards which Sprong may be like domi/Larkin right now spent an extra year down. Sprongs value to the Penguins this year is likely equivalent to the production we can get from trading a 3rd round pick for a rental depth forward.

I don’t get this concept of wasting a year for Sprong because he isn’t playing regularly or in the top 6, sending him back to a league that offers no opportunity for development would be the definition of wasting a year in my eyes. Sure I’d like to see him in the lineup on a nightly basis (I think 3rd or 4th line RW is just fine) but he will still benefit more from practicing (where real development occurs) and playing half the games than he will playing 1st line every night in the Q where there won’t be a… Read more »

I would argue that playing more is just as key to his development as getting 7 minutes of ice every 3 or 4 nights tho.

I would argue that it isn’t even a factor when the level of play doesn’t challenge the player to improve. In the Q, most night Sprong will be able to play at 75% and will still dominant and be the best player on the ice by a large margin and that just isn’t a good environment for development. I know it’s a different situation but I see and deal with this all the time in youth hockey, Little Johnny is twice as good as Little Timmy at 14, Johnny and his parents are content with him playing on weaker teams… Read more »

Fehr is fine in the top 6 playing the role that Dupuis has played. The more defensively responsible forward that can add a little offense too. That being said we have a ton of skilled guys to put in top 6 and probably find Fehr more useful in his defensive role that chips in offense in the bottom 6.

you keep Fehr bottom 6 to have some balance time to time put up but he should stay bottom 6 he is good where he is at man you clowns as soon as someone scores 2 goals you want them to become top 6 same was said about benett ,TK,

Did I say we should put Fehr in top 6? He’s basically a mid-6 forward. So he can slot up if we need to, but with our depth probably better in the bottom 6 for what we need from him.

Do you know how to use a period or comma?

Is this a question? Usually questions are followed by a question mark.

You sure he isnt in Vancouver too?

yeah i am sure you arrogant clown

LOL, and I am pretty sure you were used as a basketball as kid. Bounced on your head more than your whore mother bounced on the heads of dacks of random strangers

I hope they send Sprong back only because Johnston doesn’t seem to want him here and will most likely misuse or scratch him more often than not over 82 games. If he actually played him on the top six then I’d have a different opinion…

Agreed, criminal that they wasted the entry year. Kid earned his spot but the use of him has been bullshit

I agree with this article 100% and actually feel that Sprong still might be sent back which as stated may open a slot for Fehr once the first injury hits anyway.