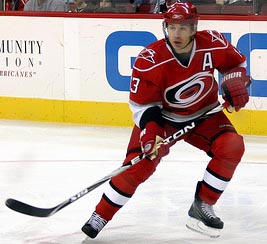 Trade Freeze Ends on Feb. 28th (11:59 p.m.)
Trade buzz during the Olympic break has been on Hurricanes winger Ray Whitney. Whitney had previously drawn significant interest from up to 6 teams but the Hurricanes asking price and Whitney’s NTC have derailed talks with a number of teams.
One team yet to become a suitor for Whitney is the Pittsburgh Penguins. One source said it’s likely that Whitney was discussed this week between J.P. Barry, the agent for Whitney, and Ray Shero but Pittsburgh continues to balk at the Hurricanes asking price of a high draft choice and prospect Luca Caputi in exchange for Whitney and defenseman Andrew Alberts.
Indications are Carolina doesn’t have much interest in dealing with Pittsburgh due to their unwillingness to include a high draft pick and a mid/top tier prospect. Their efforts have been elsewhere.
The Hurricanes have been involved in talks with the Kings, Red Wings and Canucks of late. Philadelphia, Boston have also been kicking the tires on making a run at Whitney. The Kings have been the only team given permission to negotiate an extension with Whitney.
***Latest buzz around the league***

According to James Murphy of NESN.com, trade discussions involving Dan Hamhuis, the 12th overall pick in the 2001 NHL entry draft, have intensified to the point where he may be dealt immediately after the NHL Olympic roster freeze is lifted March 1.
Murphy reports, the Bruins, along with the Penguins and Sabres, are very much in the running to acquire Hamhuis. The asking price is apparently a forward that could bring some much-needed scoring to the Nashville offense and a high second-round or late first-round draft pick at the 2010 NHL Draft.
Sources tell me the Flyers and Devils are also in the mix.
Pittsburgh is believed to be offering Ruslan Fedotenko and a high draft choice.

Stars getting offers for Ott

The Dallas Morning News reports, the Dallas Stars are getting plenty of inquiries on winger Steve Ott who is an impending free agent. The Stars are trying to workout an extension during the Olympic break but could move him once the trade freeze is lifted.
The Stars also remain active in trying to land a top-four defenseman, most notably a young puck moving defenseman.

The play of Jaromir Jagr has been the talk of the Olympics as the 38 year old winger is showing a strong interest in returning to the NHL next season.
Michael Russo of the Star Tribune reports, “Most are assuming that the Edmonton Oilers have the inside shot since they went after Jagr hard before he signed in the KHL. But if Jagr continues this tourney to show he’s still got game, the Oilers may need to get in line.”
It is likely that a number of teams will express interest in Jagr. One destination being talked about in Vancouver, is the Los Angeles Kings.
Meanwhile, talk that Jagr wants to make things right with Pittsburgh is being regarded as just “talk”. Jagr had his chance to return to Pittsburgh in July 2008 when Pittsburgh discussed a two year deal worth $5.5 million per season but Jagr never moved on the offer.