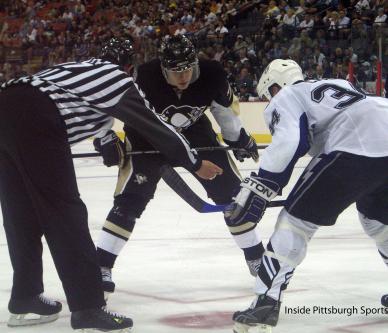 The Stanley Cup is back in Pittsburgh today as Eddie Johnston has his day with the Cup. Johnson has been a fixture in the front office since the 1980’s and will continue to have a role in the organization for atleast one more season or until he decides to retire.
A number of players, team personnel have already had their day with the Cup. Evgeni Malkin, Sidney Crosby will have the Cup last.
Malkin will have the Cup on August 17-18 and plans to throw a big party in his hometown.
*** The Penguins are very pleased on how free agency has gone. With Jay McKee in the fold, the teams #1 priority is adding a veteran goaltender to battle John Curry in training camp and either serve as the #2 or #3 goaltender.
Two names that continue to garner interest are
Kevin Weekes and Curtis Sanford. Pittsburgh has made a two- way contract offer to Curtis Sanford.
Weekes was believed to be waiting on the New Jersey Devils but they have went into another direction.
On the forward front, Pittsburgh plans to stand pat, although they continue to explore the trade market. They are currently not in talks with any free agents.
Petr Sykora will not be back. The two sides have held discussions but Penguins did not make an offer this summer and with $2.1 million in cap space, Allan Walsh the agent for Sykora doesn’t expect Pittsburgh to make one anytime soon.
* New contracts with John Curry, Tim Wallace and Ben Lovejoy are believed to be close. We should see an official announcement next week.
* The Penguins haven’t ruled out adding another veteran defenseman near the league minimum. They will explore tryout invites later in the summer on the blueline and possibily at forward.