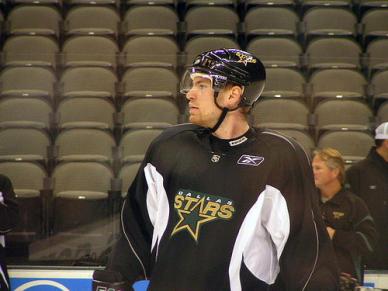 The signing of Brent Johnson is believed to be the final piece for the Penguins 2009-2010 roster, but the Penguins haven’t close the door on bringing in a depth player or two on a training camp invite.
The team is quietly exploring the free agent market for a depth player on their blueline that could fill a void.
Ray Shero has always been a fan of having 8-9 nhl ready defenseman in camp and that’s not the case if the Penguins went into camp with their current roster.
The issue at hand for the Penguins management team is the fact that they would like to keep atleast $1-$1.3 million in cap space to have some extra room to make trades later in the season.
One defenseman the Penguins have had brief talks with is Martin Skoula. A former teammate of Dan Bylsma (short period), Skoula, 29, has played the past three in a half seasons with Minnesota Wild.
Regarded as a defensive – defenseman, Skoula is a combined -28 the past two seasons but in talking to sources in Minnesota, he wasn’t as bad as the numbers may indicate. Although, the plus/minus rating is very alarming.
Pittsburgh only has interest in bringing Skoula in on a training camp invite or a two way contract.
Skoula made a salary of $1.9 million last season and like a lot of players is having trouble finding a guaranteed contract.
*The representatives for Rhett Warrener have contacted a number of teams including the Penguins, Rangers about the possibility of getting a camp invite. Sources would not elaborate if Pittsburgh has any interest.
*Philippe Boucher will retire if he doesn’t receive a guaranteed contract. Boucher was well liked in the locker room and became a mentor for Kris Letang as the two became very close off the ice.
But, there hasn’t been much movement from Pittsburgh to this point and sources close to Boucher indicate they haven’t heard from Pittsburgh in over three weeks.
Update on Kris Letang
Kris Letang ended the season with inflammation in his left elbow, which team trainers believed he would likely under-go a minor procedure in the off-season.
The Penguins have been monitoring the situation but they aren’t concerned.
The mystery forward that has interest in Pittsburgh is Taylor Pyatt.
Pyatt, 27, (6-4, 230 lbs) scored 23 goals in the 2006-2007 season. His goal production has dropped the past two seasons (16, 10)