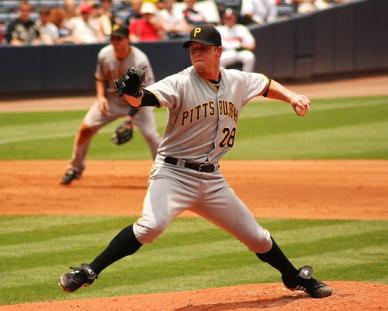 The Pirates figure to be active leading up to Friday’s trade deadline as the team has been engaged with in trade talks with a number of teams. TIOPS has the latest
Duke will go before Maholm
The Pirates prefer to keep Paul Maholm over Zach Duke. Both are unlikely to be dealt but Duke is receiving a lot of interest and Pittsburgh will consider moving him in the right deal as his value is high. Texas remains very interested. Pittsburgh has been eyeing Rangers prospect Martin Perez. The Phillies could jump back into the mix if they miss out on Roy Halladay or Cliff Lee.
Talks with Giants at an impasse
Talks between the Pirates and Giants are currently an impasse (not dead). The two teams have discussed Pirates second baseman Freddy Sanchez for over a month but the Giants want the Pirates to pick up half of Sanchez’s salary for next season.
Another obstacle in talks has been the fact that the Giants will not include left hander Jonathan Sanchez.
For the time being the Giants have turned their attention to Indians OF Ryan Garko and a pair of hitters in Nick Johnson and Josh Willingham of the Washington Nationals.
Capps highly Coveted/Unlikely to be dealt?
Matt Capps continues to draw considerable interest the league. Despite the interest, Pittsburgh is not close to deadling him. Contenders are looking at Capps as a reliever and aren’t willing pay a closers value.
Pittsburgh receiving calls about Tom Gorzelanny
One player to keep an eye on is Tom Gorzelanny. The Tigers, Cubs are among a few teams looking at Gorzelanny.
Add the Phillies to the list of teams interested in John Grabow
John Grabow has drawn interest from up to 6 teams including the Cubs, Yankees and Dodgers. Add the Philadelphia Phillies to that list as the Phillies held discussions with the Pirates over the weekend.