The Zetterberg – Crosby matchup returns to Detroit; Datsyuk expected to play in game 5 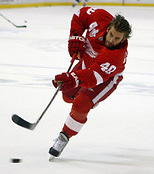 Pittsburgh Penguins forward Sidney Crosby had a goal and an assist in game 4 and all of a sudden, Pittsburgh has both of star centers playing at the top of their game heading into game 5.
Evgeni Malkin has arguably been the M.V.P. of the series, while through the first three games of the series, Sidney Crosby was unable to solve Red Wings goaltender Chris Osgood.
With the series heading back to Detroit, Henrik Zetterberg will be matched up against Crosby nearly every shift as Zetterberg kept Crosby in check during games 1 and 2.
The matchup will be at the forefront and the question for the Penguins will be whether Crosby can build off of his success in game 4?
Crosby was the faster more energized player in game 4. Zetterberg looked tired in the waning moments of game 4 but Zetterberg is a world class player and he will have his legs back after the Red Wings were givien a day off on Friday.
Just as the series is tied 2-2, so is the Crosby – Zetterberg matchup.
Does Crosby build off of his game 4 performance and take his game to another level or does Henrik Zetterberg get the upper hand like he did in games 1 & 2?
Now that Crosby has found the back of the net, this is the kind of game where he has a big night.
More News & Notes and the latest Buzz
Detroit Red Wings head coach Mike Babcock told the media on Friday that forward Pavel Datsyuk will return to the lineup Saturday night.
Datsyuk skated for over 45 minutes Friday afternoon as the Red Wings had an optional practice.
Datsyuk is expected to play wing on a line with Marian Hossa and Valtteri Filppula.
Petr Sykora conducted an interview with a newspaper from his home country in Czechoslovakia this week.
It’s being speculated that some interesting quotes are expected to come out. I’m told the article won’t go public until after the Cup Finals.