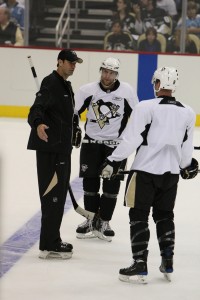 Morning Tidbits
— Penguins forward Mike Comrie who is recovering from hip surgery, knows that the odds of him getting a true shot of getting back into the lineup are slim. He hinted to that on Wednesday, following practice at Southpointe.
However, Comrie’s opportunity to show something could have opened up due to the injury to Dustin Jeffrey. With Jeffrey potentially lost for at least a few weeks and Mark Letestu still rehabbing his upper body injury, Comrie’s chance is now.
The problem is that Comrie made it sound like on Wednesday that he’s not quite ready. Will be interesting if Comrie tries to rush back a few days ahead of schedule.
Comrie is skating again this morning for the Penguins optional skate. His skating has looked good.
The Penguins have 3 games in 5 nights, starting tonight against the New Jersey Devils. With Letestu getting close to coming back, Comrie’s opportunity might not be around next week, even with the injury to Jeffrey.
— The battle for the No. 6 defenseman spot between Deryk Engelland and Ben Lovejoy has been interesting to watch this season.
Deryk Engelland for the first half of the season, solified his spot as the No. 6 defenseman, than after signing a 3 year extension in January, Ben Lovejoy began to leap Engelland for playing time, going into the All-Star break, playing three straight games over Engelland.
Than after the All-Star break, Lovejoy was back in the press box on a nightly basis, until Brooks Orpik went down with an injury.
With Orpik’s return close and just a few days away, now things are moving back into Ben Lovejoy’s direction.
Lovejoy logged over 21 minutes of ice time last time and continues to see increased ice time, while Engelland continues to see less and less ice time, 11:15 last night.
Come playoff time, matchups may dictate who plays but Dan Bylsma is always enamored with defenseman who can skate and be a factor off the rush. That gives Lovejoy a needed edge, especially in a potential series with the Tampa Bay Lightning.