1. Buzz around the league on Penguins GM Jim Rutherford is he has full support since the coaching change to go all-in at the trade deadline. Rutherford believes this group is really close and some above him think so too, sources close to the situation say. Rutherford has the green light to make a big splash, even if it means mortgaging the future once again.

2. Chris Kunitz is going well of late offensively with eight points in his last six games and many continue to take the stance that they’ll believe when they see it that Kunitz is ever moved off Sidney Crosby’s line full-time this season but finding a playmaking type of left winger to play with Sidney Crosby is a priority for management and viewed as the best way to continue to maximize Crosby’s ability for the short and long-term. Someone who can do a lot of what Kunitz used to be able to do, in getting Crosby the puck in the right spots.

Doesn’t mean it will happen by the deadline but it’s on their radar.

3. Pittsburgh scored two power play goals vs Ottawa and the Penguins are 5-0 under Mike Sullivan when scoring two power play goals or more in a game. A lot of factors are there for the resurgence on the power play, one scout pointed to Patric Hornqvist. “His net-front presence is like having a sixth skater on the ice,” the scout said. “The goalies eyes for a split second are on the player [Hornqvist] and what he’s doing [in the crease area]. Before you know it the puck is in the back of your net.”

4. Pittsburgh’s lack of first round pick is not expected to have them shy away from looking into [hide] Dustin Byfuglien if he hits the market, a source said. There’s a big admiration from Rutherford towards Byfuglien as mentioned in the past. Darren Dreger yesterday called the Penguins, Kings among the fits. Keep an eye on the Capitals and Panthers. 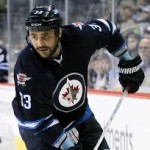 5. Peyton Manning to the LA Rams? Should he want to play another season, ESPN’s Adam Schefter reports the Rams have interest in Manning. That will get tickets sold.[/hide]