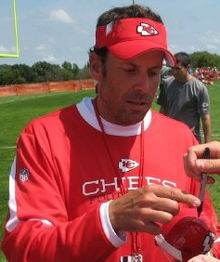 The Pittsburgh Steelers have reached an agreement with former Kansas City Chiefs head coach Todd Haley to be the team’s new offensive coordinator. The Steelers and Haley’s representatives are putting the finishing touches on a three year contract.
The team is expected to make an official announcement on Tuesday.
The 44-year-old Haley was fired with cause by Kansas City on Dec. 13, 2011 and talk around the league is that no team wanted to touch him this off-season as a possible quarterbacks/WR coach or offensive coordinator.Â Â In two-plus seasons with the Chiefs, Haley went 19-26, leading Kansas City to a division title in 2010.
Prior to joining Kansas, Haley was the Arizona Cardinals offensive coordinator in 2007 and 2008. In 2008, Arizona had one of the most prolific offenses, ranking third in points, (26.7 ppg) and fourth overall in offense, averaging 365.8 yards per game.
Haley interviewed for the Steelers offensive coordinator position on January 31 and it is widely believed that Haley would not have received an interview if it weren’t for Haley’s family having close ties to the Rooney family. Haley’s father Dick Haley was the Steelers director of player personnel from 1971 to 1990.
Haley though made a strong impression on head coach Mike Tomlin and for Haley to come on board, Tomlin had to sign off on the hire despite a strong presence in the process from owner Art Rooney II.
Haley replaces the departed Bruce Arians and from a personality standpoint, he is a complete 360 from Arians. Haley comes with baggage and concernsÂ and there have been several red flags raised about him in the past, but there’s no denying he’s a good football mindÂ who adapts to his personnel extremely well.
As offensive coordinator with the Cardinals in 2008, Haley helped lead Arizona to a Super Bowl berth, running a prolific passing attack with a quick strike quarterback in Kurt Warner who unlike Ben Roethlisberger gets the ball quickly out of his hands. The Cardinals averaged 20.6 first downs per game and 365.8 yards per game in 09.
In Kansas City, Haley didn’t have a Kurt Warner behind center or a Larry Fitzgerald and Anquan Boldin at the wide receiver position. Haley adaptedÂ to his personnelÂ and the best season to go off of was 2010 when Haley had a healthy team in his second season as head coach.
In 2010, Haley ran a conservative mistake free offense, as the Chiefs led the NFL in rushing, averaging 164.2 rushing yards per game.
Quarterback Matt Cassel flourished under Haley in 2010 from the standpoint of putting points on the board, throwing 27 touchdowns and just 7 interceptions in 15 starts.
Despite averaging just 195.6 passing yards per game, the Chiefs were 14th in the NFL averaging 22.9 points per game, a shade under the Steelers who were 12th (23 ppg) in points in 2010.
What also stands out with Haley is that he appears to be willing to change his ways which goes with his ability to adapt to his personnel. Coming from Arizona where he ran a pass dominance offense, Haley tried to implement the same strategy during his first season with Kansas City in 2009. It was a failure as the Chiefs threw the ball 55 percent of the time, compared to running just 45 percent of the time. The Chiefs went 4-12 in 2009.
In 2010 it was a reversalÂ for the Chiefs who ran the ball 54 percent of the time, en route to a 10-6 record and division title.
The big thing with Haley off the bat will be whether he can co-exist with Ben Roethlisberger and will Roethlisberger embrace him.
Haley is a hard nose coach who gets in the face of star players. Something that will be different for Roethlisberger.
Some chatter from Steelers upper management is that Ben needs a coach who stands up to him and that was sought during this search, which took quarterbacks coach Randy Fichtner out of the mix. Haley will surely be that guy.