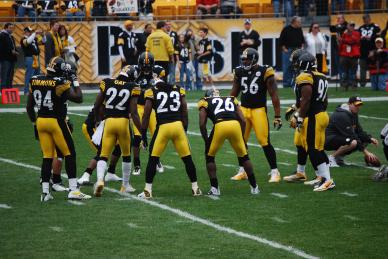 In the midst of a four game losing streak, Pittsburgh Steelers head coach Mike Tomlin is considering the possibility of making a number of lineup changes. “Obviously we are a very average football team as we sit here today, ” Tomlin said.
At cornerback there will be at least one lineup change, maybe two.
Rookie cornerback Joe Burnett is expected to replace William Gay in the starting lineup and internally, the team is exploring the possibility of replacing Ike Taylor in the starting lineup with Keenan Lewis.
“It’s going to be Joe Burnett, ” Mike Tomlin said in reference to who will replace William Gay in the starting lineup. Tomlin added, “Keenan Lewis is going to get an opportunity to play. We want to see both of those guys. They’re young guys; they’ve been working. We want to see both of those guys play.”
Benching Ike Taylor would be a bold move by Mike Tomlin and it’s clear that the Steelers feel Keenan Lewis (2009 3rd round pick) is ready for some playing time.
Cornerback may not be the only position that a starter or two will sit. The Steelers are considering other changes on defense, including at middle linebacker, defensive end and safety. Changes on offense are also being discussed along with special teams.
Mike Tomlin is making it known that he won’t cater to veterans as the Steelers struggles have continued.
Injury Front
The status for wide receiver Hines Ward is not good for Thursday night. Ward is “very questionable”, head coach Mike Tomlin indicated today. Ward suffered a hamstring injury against Oakland.
I wonder if Ben Roethlisberger will question Ward’s courage and toughness on national T.V. if he won’t play?
Ward’s expected absence will open up a spot for 2nd year wide receiver Limas Sweed to receive a significant amount of playing time against Cleveland.
Sweed has practiced very well of late and Thursday night could be a prime opportunity for him to move in the right direction and put his previous struggles in the past.
The Steelers will sign a fourth receiver for Thursday nights game. Tomlin would not commit on whether Mike Wallace or Limas Sweed would start in place of Ward.
Cornerback William Gay is unlikely to play after suffering a concussion. Gay was being evaluated today.
Running back Rashard Mendenhall (knee) will be limited early in the week but is expected to play.
Troy Polamalu will sit for one more game, with Polamalu on track to return to the lineup on December 20th against the Green Bay Packers.
Tomlin Monday Quotes
On being 6-6: “Obviously we are a very average football team as we sit here today.”
On Lineup Changes: “We’re in the early stages of development of our plan as I sit here right now, but I assure you there are going to be some.”
On who will start for William Gay: “It’s going to be Joe Burnett. Keenan Lewis is going to get an opportunity to play. We want to see both of those guys. They’re young guys; they’ve been working. We want to see both of those guys play.” — Tomlin indicated he wants to keep Deshea Townsend in Dime packages.
On Keenan Lewis not being active for games: “He played in our opener and sustained an injury, missed the next several games due to that injury, worked his way back into another opportunity to play, and really, in recent weeks, he hadn’t dressed the last two games because we wanted big-bodied special teams guys available and suited – Carey Davis, for instance, who we thought was critical as a punt-protection guy to block Ed Reed and his up-and-under punt rush.”
“Each week we evaluate the matchups in all three phases. Some of them are special teams. Sometimes the nature of the matchup dictates that we have a big-bodied special teams man suited as opposed to a little-bodied special teams man. We like some of the things Keenan has done. He’s been consistently on the rise since coming back from that injury, but due to matchups he hadn’t been suited the last two weeks. Obviously, if William Gay doesn’t play that won’t be a factor in determining whether or not he plays this week. He’ll have an opportunity to play.”
On missed assignments by defense in the 4th quarter: “Yeah, we did. We had a couple guys out of place in terms of applying pressure to the quarterback with a blitz package. We did have all the eligibles covered. It wasn’t anything from that structural standpoint, but we didn’t get what we want from blitz-entry standpoint, and it created an opportunity for the quarterback to step up in the pocket and find Louis Murphy in the left corner of the end zone.” — Tomlin was also asked if one of those corners should have been back with Ryan Mundy on the the game winning touchdown and Tomlin said, “Certainly, yes.”
On the possibility of Ike Taylor being replaced: “Certainly. Certainly. I think that’s appropriate that we look at giving guys some opportunities to see if they can play. What that means or to what extent that means changes will be made I think is a little premature, but I acknowledge that that’s taken place.”