As few are giving the Dolphins a chance this Sunday vs the Steelers, Miami figures to have to have a dominant game on the ground to compete with the heavily favored Steelers.

Jay Ajayi gashed the Steelers for 205 yards on the ground in a Dolphins 30-15 upset win over the Steelers earlier this season and Mike Tomlin isn’t pretending like it didn’t happen.

“We’ve played these guys earlier this year, make no mistake they got after us in every way,” Tomlin said. “Last time on video they flat out got after us.”

“Their offensive line won of the line of scrimmage and won it consistently. We’re not going to pretend that the 200 yard day was a lightning strike. It was very real.”

A big focus for Tomlin this week is stressing the importance of the Steelers combating Miami’s physicality in their run game that starts with wide receiver Jarvis Landry, a player the Steelers loved coming out of the draft a few years ago.

“Lot of running game that they had against us last was out of three wide out personnel groups. Lot of that has to do with their physicality on the perimeter,” said Tomlin.

“WR Jarvis Landry sets the tone there,” Tomlin said of the Dolphins running game. “He’s a special, special player. Reminiscent of how Hines Ward played the game. Physicality in which he plays is rare for the position.”

The third year pro has had a big year with 94 receptions for 1,136 yards and 4 touchdowns. 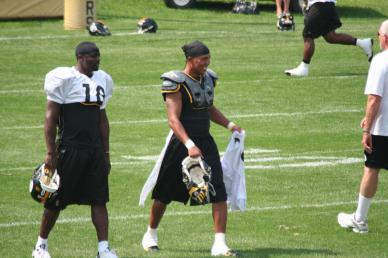 Hines Ward Not a finalist for 2017 HOF Class