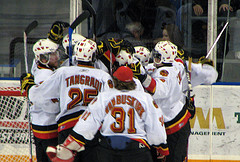 Twenty Six prospects have been invited to the Penguins conditioning camp all of the 26 participates arrived in Pittsburgh this evening.
The players will go through a 5 on-ice sessions along with conditioning tests, including off-ice activities throughout the week, such as attending a Pirates game Tuesday night, a Scavenger Hunt through the city on Wednesday evening and a paint ball session Thursday.
Tuesday morning, the players will go through their first set of
conditioning tests. The prospect camp is a great opportunity for the players to catch the eye of the organization like Nick Johnson did last summer when he was regarded as the most improved player in the camp.
While the players have the opportunity to make their mark on the ice, it is also a great opportunity for the coaching staff to get to know some of the newcomers like Eric Tangradi, Simon Despres and to get one-on-one time with each player, which doesn’t happen during the season.
The player I’m very interested in seeing for the first time is 2009 3rd round pick Ben Hanowski.
A former USHL scout for the Sioux Falls Stampede who I became close with during the early part of the decade has been raving about Hanowski’s goal scoring ability and tells me Hanowski is the Penguins top winger prospect not named Eric Tangradi.