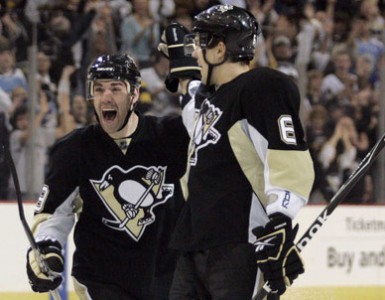 The Washington Capitals paid a steep price for Jason Arnott. In return for Arnott, Washington gives up David Steckel and a 2nd round pick. Pittsburgh was never going to come close to that asking price.

Shero to speak at 3:30 p.m., team has just announced. A sign that a deal has likely fallen through.

A ton of chatter in Pens circles that the team could be up to something big. They are said to be willing to move Eric Tangradi. Rob Rossi (@Rossi_On_Pens) of the Tribune-Review adds more fuel to the fire via twitter: “Just had second NHL person tell me, based off what they’re hearing, not to be surprised if Pens pull a stunner.”

Darren Dreger of TSN reports negotiations between Curtis Glencross and the Calgary Flames have hit a snag. Pittsburgh has looked into Glencross several times over the past couple weeks but the Flames don’t want to move him.

There’s some chatter going around that the Penguins could make a late offer for Arnott. The Penguins are said to have expressed “preliminary interest” in Arnott and that the price “has to be right”. No one inside the organization will deny that the Penguins have not at least looked into him.

Pens source tells me Toronto’s Clark MacArthur remains in play but for a high asking price as the trade deadline is less than 90 minutes away. He’s a player the Penguins like but concerns about his asking price this summer makes him a major risk to give assets up for. Any move for MacArthur would center around Eric Tangradi. Brian Burke in an interview with TSN.Ca just said that he has several offers for MacArthur but he likely stays.

Panthers beat writer George Richards reports Marty Reasoner is staying put and will not be traded. The Penguins had looked hard into him.

Indications are the Penguins are not likely to move on Jason Arnott but the team continues to express what is being described as “preliminary interest”, team sources tell me. They are said to be “monitoring” the asking price. Pittsburgh is among the teams Arnott would waive his NTC to, sources in Arnott’s camp tell me. Montreal, Washington, Los Angeles and Tampa Bay believed to be among teams in the mix.

Two hours left until the deadline and a team source tells me that there is “still a chance” that the Penguins add a forward as the team remains active in their pursuit of a forward.

The Montreal Canadiens, Los Angeles Kings and Nashville Predators are among the teams chasing Edmonton’s Dustin Penner very hard as he’s looking like the most likely “big name” to be moved at this point.

Link to Post-Practice Notes from Consol: Bylsma talks roster and where Kovalev fits on the power play once Paul Martin returns.

Alexei Kovalev did not practice today for Pittsburgh. Maintenance day per team contacts.

The Washington Capitals have acquired defenseman Dennis Wideman inexchange for a 3rd round pick in 2011 and a prospect.

Goaltender Brent Johnson is not practicing which is causing some trade talk. Rob Rossi of the Tribune-Review mentions via twitter that Pit had previously had talks with Florida about Johnson. The Red Wings also checked into Johnson’s availability weeks ago, sources indicate. There has been no indication that Pittsburgh is looking to move him.

Radek Dvorak has been traded to the Atlanta Thrashers in-exchange for Niclas Bergfors and Rissmiller. Bigger return than expected on Dvorak.

Pittsburgh has scouted the Panthers heavily over the past two-three weeks. Sources indicate that the team has had some minor discussions with Florida about a few different scenario’s, showing varying degrees of interest in Marty Reasoner and Chris Higgins (who we can’t confirm if the Penguins are willing to go after due to his injury.

We are 5 hours away until the trade deadline and the Penguins focus is said to remain on the forward market. A deal for a defenseman is not expected.

With a small group of centers available, Panthers GM Dale Tallon is seeking a second round pick for the 34 year old center, sources indicate. The price will have to come down for Pittsburgh to move on him.

Pens practice today at 11:00 a.m. The team is not inclined to move any roster players. Paul Martin and possibly Chris Kunitz are expected to be full participants in today’s workout.

Kevin Allen of USA Today reports, Panthers winger Chris Higgins will only be out for 7-10 days with a broken thumb, not the presumed 3-to-4 weeks. Higgins is a player the Penguins previously had on their radar, prior to the injury. As of yesterday, he was said to be off their radar due to the injury.

The Penguins have gone into today with the intention of adding “if the price is right”. The team continues to monitor the market for a top-9 forward.