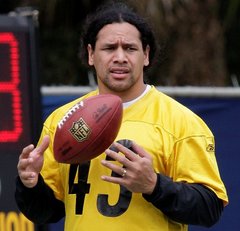 A hot topic in Steelers circles this week is Troy Polamalu. As noted in our Wednesday Practice Notes, defensive coordinator Dick LeBeau denies using Polamalu differently since returning from injury but the facts are Polamalu is playing a much more conservative role of late.
There are a number of pundits who say Polamalu needs to be playing a hybrid safety role for the Steelers to slow down Aaron Rodgers and the Green Bay Packers.
There’s a strong argument to that, however, all signs point to Polamalu playing a deep cover-2 safety role for the fourth straight game.
Putting Polamalu’s health aside which has played a factor in the Steelers going this route, a primary focus for the Steelers will be limiting the Packers vertical passing game which is going to prompt Polamalu staying in that role.
The Packers will run four and five receiver sets prominently, especially without a pass catching tight end threat and with the Steelers lacking adequate depth in their secondary, it’s another reason Polamalu is going to be forced out of the hybrid role in “most situations”.
Many are expecting the Packers to spread the Steelers out and copy the Patriots game plan and attack the Steelers in the short passing game. The Packers are excellent at exploiting defenses with their slant packages.
Based on their preparations in practice this week, Pittsburgh is prepared to run out of the nickle and the Steelers have always been willing to give up yards in the short-passing because the mindset is that there are so many playmakers on the field, a big play is eventually going to happen.
In the vertical passing game against top-16 offenses, the Steelers have been vulnerable. According to Scouts INC, cornerback Bryant McFadden was targeted for 19 vertical throws in games against top-16 offenses and allowed 14 completions/defensive pass penalties for 265 yards, 4 touchdowns and no interceptions. That rounds out to a 149.2 passer rating for quarterbacks on those attempts.
On the other side, Ike Taylor has given up 14.6 yards per attempt to McFadden’s 13.3 YPA on vertical throws against top-16 offenses and on throws of 30 or more yards, Taylor has allowed 3 completions on 4 attempts.
The Steelers are the most dynamic defense in the NFL when Polamalu’s roaming around the field and in around the line of scrimmage.
But, in this matchup, Polamalu staying back in that deep-cover 2 safety role is the route to go. However, with an extra week off (to rest his injured Achilles) and everything on the line, I still think we’re going to see LeBeau use Polamalu more aggressively in certain situations and look to nail the Packers for that one play where their unable to indentify Polamalu.