Wednesday Practice Report: Steelers asking Wallace to step up his game as a blocker 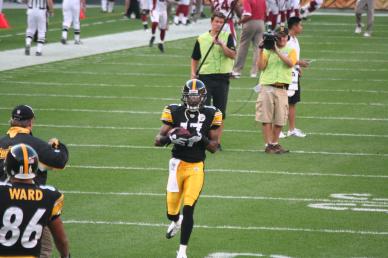 By Mike Bires
Photo: David Hague – Inside Pittsburgh Sports
PITTSBURGH — Ben Roethlisberger, speaking publicly for the first time since injuring his right leg last Thursday, said he doesn’t need an apology from Max Starks.
Roethlisberger, the Steelers’ star quarterback, suffered an Achilles tendon/heel bruise on the last practice of training camp when he was stepped on by Starks, a 6-foot-8 and 345-pound tackle.
“No apology needed,” Roethlisberger said before Wednesday’s practice at the UPMC Sports Performance Complex. “It was a total accident.”
Nonetheless, Roethlisberger got quite a scare.
“It was a pretty scary thing to have a 300-and-heavy-pound guy step on the back of your foot on your Achilles,” said Roethlisberger, who sat out Saturday’s preseason game against the Washington Redskins. “Luckily, it was (only) a bruise.”
Roethlisberger has practiced the past two days and will play this coming Saturday against the Buffalo Bills at Heinz Field.
“A lot of us (first-stringers) will get a lot of playing time,” Roethlisberger said. “A half or so … we’ll see how the flow of the game goes.”
HARRISON AND PARQUET SQUARE OFF
Practice ended Wednesday with linebacker James Harrison and tackle Jeremy Parquet involved in a brief scuffle.
Before any punches landed, teammates separated Harrison and Parquet.
Harrison and Parquet both downplayed the fracas.
“It was nothing. Just a little football stuff,” said Harrison, the 2008 NFL Defensive Player of the Year.
“It was nothing personal,” Parquet said. “It was just emotions. We’re teammates. It’s over.”
BLOCK LIKE HINES
Wide receiver Limas Sweed may have dropped a pass Saturday night in Washington. But at least he threw a block that helped spring running back Willie Parker on his 3-yard touchdown run in the first quarter.
But in the second quarter on a run by back-up running back Rashard Mendenhall, rookie wideout Mike Wallace was called for holding.
Obviously, part of Wallace’s transition from college to pro is learning how to block.
“Well, he looks like a rookie as a blocker,” coach Mike Tomlin said of Wallace. “He has to understand … what comes with being a Pittsburgh Steeler wide receiver. Nobody knows better than Hines. We’re asking (Wallace) to step his game up in that regard.”
Ward said he began throwing his patented bone-crunching blocks as a rookie in 1998.
“I’ve been a good blocker since I’ve been here,” Ward said. “I’ve had to be. I was never going to be a guy who would catch 10 to 12 passes a game. Not with the kind of offense we run. So I had to do other things in order to make a name for myself, and one of the ways to do that was by developing my skills as a blocker.”
INJURY UPDATE
Wide receiver Santonio Holmes and running back Willie Parker missed practice for the second straight day.
Holmes took a helmet to the back Saturday in Washington. Parker has a sore hamstring.
Running back/fullback Frank “Tank” Summers sat out again with a hamstring injury and will miss his second straight game.
Third-team QB Dennis Dixon watched practice with his right arm in a sling. Dixon suffered a separated right shoulder in Washington and might miss the last two preseason games.
Meanwhile, tight end Sean McHugh had arthroscopic knee surgery on Wednedsay.