What to make of Goodell’s controversial comments on Roethlisberger 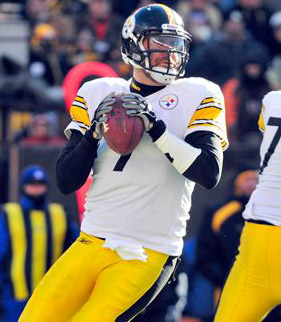 NFL commissioner Roger Goodell created some controversy for the Steelers on Monday when comments from Goodell appeared on Sports Illustrated.com about quarterback Ben Roethlisberger.
Goodell threw Roethlisberger under the bus to SI’s Peter King when Goodell said he never “connected” with Roethlisberger and originally said not a single player came to his defense.
Goodell told King that before coming down with Roethlisberger’s suspension he spoke with what was first reported by King as over 20 “Steelers players” about Roethlisberger.
“I bet two dozen players … Not one, not a single player, went to his defense, ” Goodell told King. “It wasn’t personal in a sense, but all kinds of stories like, ‘He won’t sign my jersey.”
This story took off today but several hours later King is trying to retract the story.
Peter King on what he’s now calling a mistake: “NFL commissioner Roger Goodell talked to an estimated two dozen NFL players, and not two dozen Steelers players, before reaching his disciplinary conclusion on Pittsburgh quarterback Ben Roethlisberger in 2010.
“This is an important clarification of something I wrote in my “Monday Morning Quarterback” column. I erred in inserting the parenthetical “Steelers” in a quote by Goodell, which was an incorrect assumption on my part.
“In a Jan. 7 interview for a larger profile on Goodell for this week’s issue of Sports Illustrated, Goodell was talking about his deliberations for the Roethlisberger sanctions last year, when the Pittsburgh quarterback was accused of sexual misconduct in connection with an incident at a Georgia bar. Goodell said when he was investigating what to do with Roethlisberger, he talked to “I bet two dozen players … Not one, not a single player, went to his defense. It wasn’t personal in a sense, but all kinds of stories like, ‘He won’t sign my jersey.’ ”
“I inserted the word “Steelers” in parentheses, though Goodell had not told me specifically he meant to refer to two dozen Steelers players.”
A writer of King’s caliber who has a close relationship with Goodell, it’s hard to believe he would print this piece saying originally over 20 Steelers didn’t come to Ben’s defense without Goodell telling him that during any part of their conversation.
In my opinion, Goodell making King clarify the comments is bs and he can do it because the quote from Goodell “on the record” never states “Steelers players”. However, people I’ve spoken with claim King and Goodell are extremely close and the growing consensus is that King knew Goodell was talking about Steelers players.
Another interesting thing is why would Goodell be interviewing over two dozen NFL players about Roethlisberger who don’t play for the Steelers?
That part makes no sense as King now says Goodell meant “two dozen NFL players” not 20 Steelers who didn’t come to Ben’s defense.
Another nugget: This interview was done on Jan. 7 and if the Steelers weren’t in the Super Bowl this wouldn’t even be news right now. Now that the Steelers are, it’s damage control time.
That’s my feel on the issue.
Tidbits
With over 5,000 media credentials given out for Super Bowl week, it is certain that Ben Roethlisberger will be pressed by national media members on Tuesday about his actions last off-season and Roethlisberger’s going to give the same answers he’s been given of late, how he’s only focused on Sunday and such.
It’s time to move and the questions are going to be a waste of time for the media but Roethlisberger will likely be hit with plenty of them. Although Goodell’s comments could still be the hot story tomorrow.