Why has Malkin’s goal scoring production plummeted since 2007-2008 season? 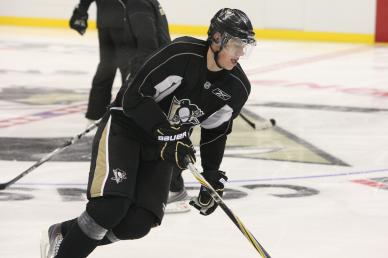 We are only 11 games into the season but it is concerning to some that Evgeni Malkin is on pace for a 22 goal season.
Widely regarded inside the organization as the Penguins best pure goal scorer, Malkin’s goal scoring production has plummeted since a 47 goal season in 2007-2008 under former head coach Michel Therrien.
2006-2007: | 33 Goals |
2007-2008: | 47 Goals |
2008-2009: | 35 goals |
2009-2010: | 28 goals |
2010-2011: | 3 goals in 11 games |
Just a few seasons ago, Malkin had the look of a player who was going to be a perennial 45+ goal player and one league observer I spoke with this week feels Malkin should be in the class of Alexander Ovechkin and Steven Stamkos when it comes to being among the league’s elite goal scorers.
Since his 47 goal season in 07-08, Malkin’s numbers have dropped from 35-to-28-to now a projected 22 goal season.
“It’s a mystery to me, an Eastern Conference evaluator on the condition of anonymity told Inside Pittsburgh Sports. “He’s underachieving in that area, immensely”
So why has Malkin failed to become the elite goal scorer he appeared to be on the verge of being? The scout refuted the notion of Ryan Malone not being around as a viable reason for Malkin’s goal scoring production going down and also refuted the notion of the Penguins lack of success on the power play over the past couple seasons.
Malkin’s power play numbers have been consistent over his previous four years, recording 40 power play points or more in his first three years. The numbers dipped to 28 last season but Malkin only appeared in 67 games and scored 13 power play goals.
Power Play Statistics
2006-2007: | 16 Goals – 24 Assists |
2007-2008: | 17 Goals – 23 Assists |
2008-2009: | 14 Goals – 27 Assists |
2009-2010: | 13 Goals – 15 Assists |
2010-2011: | 4 Assists in 11 games |
Another league observer I spoke with was more critical of Malkin and believes his inability to become an elite goal scorer has more to do with his “mindset” than other factors such as linemates, ect.
“He’s not hungry to score goals, ” the league observer said.
Throw out Malkin’s 47 goal season in 2007-2008 and take in to consideration that Malkin missed a handful of games last season, what he’s been is more of a 33-35 goal scorer in his career. Malkin is averaging 36 goals per season in four full seasons
An interesting scenario to look at is Malkin’s goal scoring success under head coaches Michel Therrien and Dan Bylsma. It’s a topic that’s been brought up with contacts over the past several months as many point to Malkin’s success under Therrien before he was fired and have wondered why Malkin has taken a step back under Bylsma and not able to keep building off of the success he had under Therrien.
Excluding the playoffs, Malkin scored 104 goals in 217 games (10/18/06 through 2/14/09) while playing for former head coach Michel Therrien.
Under Dan Bylsma, Malkin has scored 42 goals in 103 games (excluding playoffs).
Malkin’s success under Bylsma and Therrien is about exactly the same when it comes to Malkin’s first 103 games under each coach.
Malkin scored 43 goals in his first 103 games with Therrien behind the bench.
The next stretch of 103 games and after under Therrien is where Malkin soared in the goal scoring department. From 12/3/07 through 1/14/09, Malkin scored 56 goals in 103 games and tallied a total of 61 goals in his final 114 games (12/3/07 through 2/14/09) under Therrien.
From the start of the 2007-2008 season (10/5/07 vs Carolina Hurricanes) to the final game Therrien coached (2/14/09 vs Toronto Maple Leafs), Malkin scored 71 goals in 139 games.
Meanwhile, Sidney Crosby’s goal scoring production under Dan Bylsma has improved tremendously.
Excluding the playoffs, Crosby has scored 68 goals in 112 games under Bylsma, after scoring just 121 goals in 269 games under former head coach Michel Therrien.
The Penguins believe a move to wing in the long run will let Malkin reach his potential as an elite goal scorer. Other agree with that too.
If Malkin’s step back under Bylsma in the goal scoring department has more to do with linemates than anything else, now we soon get to find out if moving Jordan Staal to Malkin’s line will be the first step to the Penguins maximizing Malkin’s goal scoring ability.