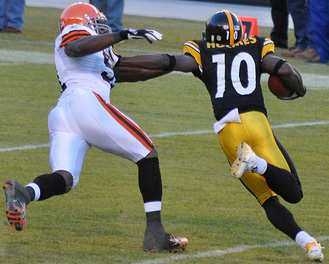 For a team that lines up two past Super Bowl MVPs at wide receiver, this figures to be a period of transition for the Pittsburgh Steelers’ pass receivers.
Yes, change is in the air.
Santonio Holmes may finally unseat Hines Ward as the No. 1 option in the passing game.
With Nate Washington gone, there is a need for a new No. 3 wideout.
With the addition of rookie Mike Wallace, the Steelers are a step faster at wide receiver than they were last year.
And finally, if 6-foot-4 Limas Sweed progresses as expected in his second pro season, Ben Roethlisberger will have that tall target he’s coveted since Plaxico Burress left after the 2004 season.
In time, this can be an outstanding group of wide receivers.
“We can cast a big net in that regard because of the versatility of a Hines Ward and the growth and maturity of Santonio Holmes as a player,” coach Mike Tomlin said of the wideouts corps that will report to training camp today.
“We are legitimately going to look at all of these guys and determine who has the most complete, well-rounded game and consistently can provide winning performances and play for us.”
Ward, a 12th-year pro who’s 33, is obviously in the twilight of his career. Still, don’t sell him short.
Even though it was Holmes who proclaimed he’d be Roethlisberger’s primary target when he reported to camp last year, it was Ward.

All Ward did was catch 81 passes for 1,043 yards and seven touchdowns. And he still delivered some of his patented bone-crunching blocks like the one that broke the jaw of Cincinnati Bengals’ linebacker Keith Rivers.
In April, the Steelers rewarded Ward for his past and future performances with a four-year, $22 million contract.
“I know my legacy here will be a Steeler for life,” said Ward, who holds several team pass-catching records including most career receptions (800). “I’ll always wear a black and gold uniform, so for me, I’m relieved.”
The franchise was collectively relieved in the second half of the 2008 season when Holmes, a first-round pick in the ’06 draft, got his game in order.
His overall production didn’t quite match his total of his previous season – 52 catches for 942 yards and eight TDs in ’07 compared to 55 catches for 821 yards and five TDs in ’08 – but he got hot at just the right time.
In the last five games of the regular season, Holmes caught three TD passes, including the game winner in Baltimore.
He snagged another TD pass in the AFC Championship Game against the Ravens and then delivered a MVP performance in the Super Bowl with nine catches for 131 yards and the game-winning TD.
“Santonio is a guy that just loves to deliver in big moments and in big games,” coach Mike Tomlin said. “In big moments, we know what we can get from him and we appreciate it.”
What Tomlin doesn’t know is what he’ll get from the cast of wannabes for the No. 3 wide receiver slot.

No doubt, there’s hope that Sweed, a second-round pick in the ’08 draft, will develop. He struggled last year as a rookie with only six catches. But in fairness to him, he did miss much of his senior season at Texas with a wrist injury.
In the event Sweed doesn’t step up, the Steelers added seven-year veteran Shaun McDonald, who signed as a free agent. Never has McDonald been a full-time starter, but he did catch 789 passes for 943 yards and six TDs two years ago with the Detroit Lions.
Then there’s Wallace, a third-round draft pick out of Ole Miss.
Wallace turned in the
second-fastest time of any wide receiver in this year’s draft. Darrius Heyward-Bey, the speedster out of Maryland drafted in the first round by the Oakland Raiders, was clocked at 4.30. Wallace ran 4.33.
Wallace used his speed at Ole Miss as a deep-ball threat and kick return specialist. He claims he’s now the fastest Steeler, even faster than running back Willie Parker, cornerback Ike Taylor, safety Troy Polamalu and Holmes.
“Those are big-time guys … all the guys you just named,” Wallace said of the Steelers’ speedsters. “They have big-time status in the league. I might be faster than those guys, but I’m not established. I’m trying to go where they are.”
And that’s back to making plays that might help the Steelers get back to the Super Bowl.
How well the Steelers fare this season will greatly depend on the production from the wide receivers.
It’s a solid group that should get better in time.