With a flawed coaching staff and players that don’t have what it takes, the Penguins have a bad combination right now 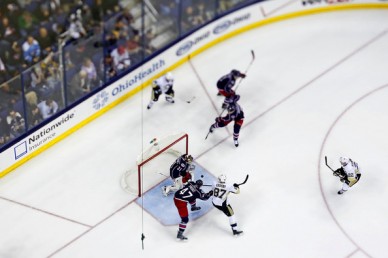 The adrenaline rush of playing for a new coach has fully worn off and the real ‘flawed’ Penguins are starting to show themselves heading into the stretch run.
For whatever reason, the Penguins remain a mentally weak group that just doesn’t have it.
Is the Penguins new coaching staff finally seeing it?
“It’s details, habits and inconsistencies that we need to correct,” Mike Johnston said following the Penguins 2-1 loss to Columbus.
The Penguins had a horrible showing in the first period vs Columbus and their captain dropping the gloves barely jump started them, along with a crucial 5-on-3 kill.
“Both of those things should have brought out a bigger response,” Johnston said.
What’s extremely worrisome is players and now the coaching staff don’t seem to have any answers.
When talking with a high ranking NHL executive about the Penguins a few weeks ago, he made a comment about how Alain Vigneault would have a field day in coaching against Mike Johnston in a seven game series.
The comment never really hit me till now in how teams that have seen the Penguins a second, third time around, are exposing the Penguins system to great measures.
This coaching staff’s answer has been going to a stretch pass, a flaw from Dan Bylsma’s system. They really have no answers at this point.
The Penguins are not built to win close, tight checking games, though, management seems to think so based on Jim Rutherford’s comments this week, and for those who believe this group can go out and win three to four rounds this spring, they are in fantasy land.
Unless they’re banking on the false hope that Sidney Crosby and Evgeni Malkin will go on a tear (together) in the playoffs similar to 2009 where both were over 30 points and dominant players for all four rounds. Little evidence that will or can happen as shutting down the Penguins star centers has become routine work for other Eastern Conference contenders.
Blame their wingers all you want but the production from both this season and a combined 6 goals in their last 20 playoff games is and should be unacceptable.
Ray Shero once said a “goal” for the Penguins is to “entertain the fans” and the Penguins stars can’t even do that these days.
What if this is how it’s going to be moving forward?
Following the Penguins loss to Washington Tuesday night, a scout told me Alexander Ovechkin is better than Sidney Crosby right now and Nicklas Backstrom is a better player than Evgeni Malkin. For those who believe the Penguins have the best 1-2 punch in hockey, it’s only Penguin fans.
Management thinks this team is better than they are and even if they didn’t, the Penguins are limited in their options to overhaul this team before March 2nd.
A combination of a rookie head coach, poor bottom-6 depth, inconsistent play from their star players, has the Penguins entering dangerous waters right now. Let’s not forget they’re goaltender has been playing over his head and is a longshot to consistently play at this level the rest of the way.
An elite power play early in the season could only hide so much. As stated in previous articles, this group isn’t any different than last year.