A WASTE OF TIME, TALENT AND MONEY 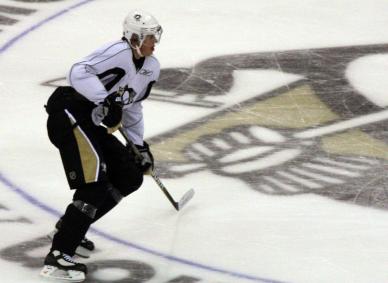 By MARK MADDEN
Evgeni Malkin is doing NOTHING. $8.7m worth of NOTHING. This season, #71 has been a waste of time, talent and money.
Malkin is useless. I don’t know what happened, but it’s got to stop. Malkin has to start manufacturing points, at the least, and preferably more than that, preferably game-winning efforts. He gets paid the same as Sid. No one expects him to be Sid, but I do expect the same ballpark. What’s going on now…ain’t no ballpark.
Rob Rossi asked Coach Disco to define what’s wrong with Geno, and Bylsma said, “I don’t have an answer for that.”
Some compare Malkin to Jaromir Jagr. Yeah, I wish. Jagr won five scoring titles. He was a seven-time first-team all-star.
No, Malkin is turning into Alexei Kovalev. A guy who dazzles regularly, but produces inconsistently.
I don’t know what you do about it. It’s so hard to trade a talent like that. It seems like the Penguins have tried everything but a kick in the ass. That doesn’t seem like a real bad option right now.
OK, let’s review the GENO EXCUSES.
1-His linemates suck. Well, Jordan Staal doesn’t. Staal is better than Sid’s linemates. And Geno has done NOTHING since Staal returned. At $8.7m, Geno needs to elevate his linemates and produce no matter what.
2-He misses Gonchar, or his mom and dad. I don’t buy that for a second, but if it’s true, GROW UP.
3-He needs to play center, not wing. Yo, Geno has played a LOT of center this season, and he hasn’t produced THERE, either. He didn’t even produce when he was playing on Sid’s wing.
4-Never mind the stats, he does the little things well. Yeah, and never mind the bollocks, here’s the Sex Pistols. First off, I’m not sure Geno IS doing the little things well. Second off, WHO CARES ABOUT THE LITTLE THINGS? When you’re paid $8.7m, your primary job is getting on the scoresheet. Mark Letestu makes 500K. Letestu can do the little things well.
5-He must be hurt. Perhaps he is. But what hockey player isn’t? If Malkin can play, he must produce. Anyway, Mario Lemieux played through cancer, thereby rendering all subsequent injury excuses moot.
I could go on and on with the excuses. We’ve heard ‘em all again and again (although, it’s worth noting, not from Malkin).
The bottom line is, Malkin needs to produce if the Penguins are to be the team they want to be. Fifteen goals and 20 assists in 39 games is NOT ACCEPTABLE. Seventeen pointless games is NOT ACCEPTABLE. Three points in his last eight games is NOT ACCEPTABLE. Talk about 2007-08 and ’08-09 all you like, that was AGES AGO in hockey time. Right now, Malkin is BRUTAL.
Malkin apologists think there must be something personal between me and Geno. There isn’t. I can’t say I have any kind of relationship with Malkin, good or bad. Language barrier, etc.
The numbers (or lack thereof) speak for themselves. If you can’t see that, you’re stupid.
Mark Madden hosts a radio show 3-6 p.m. weekdays on WXDX-FM (105.9).