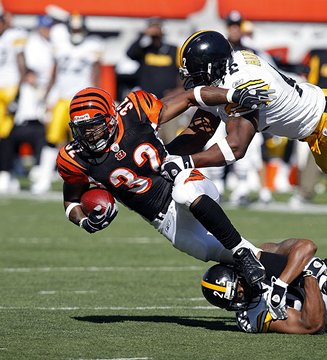 By Mike Bires
CINCINNATI _ Sooner or later, the Pittsburgh Steelers were going to lose a game in Cincinnati. But who would have thought it would have been Sunday?
After dominating the Bengals for most of the game, the Steelers let victory slip away for the second week in a row.
They allowed quarterback Carson Palmer to throw a game-winning, 4-yard touchdown pass with 14 seconds left to play that gave the Bengals an improbable 23-20 come-from-behind win.
Last week, the Steelers lost 17-14 to the Chicago Bears when they failed to protect a 14-7 fourth-quarter lead.
“We don’t want to make this a habit, but it appears to be for the second week,” coach Mike Tomlin lamented after the Steelers fell to 1-2. “We are unable to make significant plays at the end of the football game to secure a victory.
“We have some work to do. We need to finish football games better. That’s the mark of a champion, and that’s not us at this point.”
“If we don’t start making plays, it’s going to be a long year,” added Steelers defensive end Brett Keisel.
The loss was the Steelers’ first in Cincinnati since Dec. 30, 2001. The Bengals had lost to the Steelers eight straight times at home since then. But by winning Sunday, the Bengals (2-1) celebrated their most significant win since winning the AFC North in ’05.
“Priceless,” guard Bobbie Williams said of the buzz in the jubilant Bengals’ locker room. “The past is the past. This is a new team and a new day.”
The day started terribly for the Bengals, who trailed 13-0 after the Steelers scored a touchdown and two field goals on their first three possessions. At that point of the game, the Steelers had a 270 to minus-10 edge in total yards.
At that point, the home crowd at Paul Brown Stadium was booing the Bengals.
But the Bengals started to turn things as time expired in the first half when Shayne Graham kicked a 34-yard field goal to make it 13-3 at the break.
Then the momentum really began to change on the Steelers’ first possession of the second half. That’s when quarterback Ben Roethlisberger threw an interception that was returned 30 yards for a touchdown by Bengals’ cornerback Jonathan Joseph. The pass was intended for wide receiver Santonio Holmes, who ran a wrong route.
“It was a miscommunication,” Roethlisberger said.
“It was a big momentum changer, a things-are-going-our-way kind of feeling,” Palmer said.
With 12:45 left in the fourth quarter, the Bengals trailed 20-9 when they got the ball on their own 15-yard line. But Palmer led them on a six-play, 85-yard drive that ended with a 23-yard touchdown run by running back Cedric Benson.
Then after forcing the Steelers to punt, Palmer led the Bengals on a 71-yard game-winning TD drive.
Twice on that drive, Palmer completed fourth-down passes, including an 11-yard toss running back Brian Leonard for a first-and-goal at the Pittsburgh 4-yard line.
Two plays later, Palmer threw to wide receiver Andre Caldwell for the 4-yard game-winner.
“Indescribable,” Palmer said. “Our fans wanted it as bad as we did. To see everyone’s hands go up and signal touchdown, and to feel that roar of the stadium, you feel blessed and lucky to be wearing that uniform. It was a great moment, a great play and a great game for our fans.”
But it was a terrible game for the reigning Super Bowl champs.
“If we score touchdowns in the first half instead of field goals, it’s not even a game,” Steelers receiver Hines Ward said. “It’s 24-0 or 24-3. You’ve got to put up seven points instead of 3s. That’s how you finish a team off.”
It’s something the Steelers have failed to do for the second straight week.
Bengals 23, Steelers 20
First Quarter
Pit_FG Reed 19, 6:55.
Pit_Parker 27 pass from Roethlisberger (Reed kick), 1:02.
Second Quarter
Pit_FG Reed 24, 12:44.
Cin_FG Graham 34, 0:00.
Third Quarter
Cin_Joseph 30 interception return (run failed), 13:35.
Pit_Roethlisberger 1 run (Reed kick), 3:00.
Fourth Quarter
Cin_Benson 23 run (pass failed), 9:14.
Cin_Caldwell 4 pass from C.Palmer (Leonard pass from C.Palmer), 0:14.
A_64,538.
INDIVIDUAL STATISTICS
*RUSHING_Pittsburgh, Parker 25-93, Moore 1-6, Roethlisberger 2-3. Cincinnati, Benson 16-76, Crocker 1-21, J.Johnson 1-2, C.Palmer 1-1.
*PASSING_Pittsburgh, Roethlisberger 22-31-1-276. Cincinnati, C.Palmer 20-37-0-183.
*RECEIVING_Pittsburgh, Wallace 7-102, Miller 5-20, Ward 4-82, Parker 2-36, Holmes 1-18, Spaeth 1-7, Moore 1-6, Sweed 1-5. Cincinnati, Caldwell 6-52, Ochocinco 5-54, Coles 5-34, Henry 1-19, Leonard 1-11, Coats 1-8, Benson 1-5.
*MISSED FIELD GOALS_Pittsburgh, Reed 52 (WL). Cincinnati, Graham 52 (WL).
0 0 votes
Article Rating
1 Comment
Inline Feedbacks
View all comments