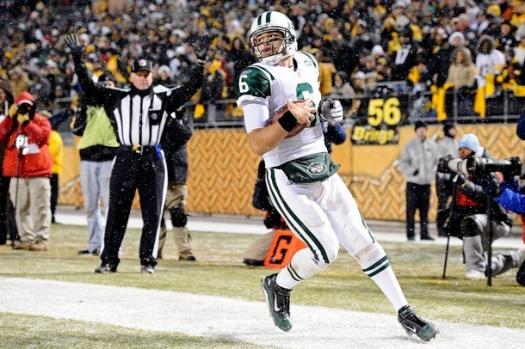 By Tim Benz
Mike Tomlin is renowned for his ability to say nothing while saying something. He is the king of the non-sound bite sound bite. He is the anti-Rex Ryan. No coach in the NFL enjoys avoiding the spotlight more than Tomlin. He’s the last coach in the world that would normally provide bulletin board material for an opposing team on purpose.
But this week, he may have done so by accident.
Yo see the only thing Tomlin hates more than making headlines is those who write the headlines. Tomlin loathes conceding a point of opinion to the media. He’s the kind of coach who would deflect credit away from a great throw and catch from Roethlisberger to Wallace, just to point out a running back who made a decent blitz pick up.
That way, he’s acknowledging a good play from his team, but throwing the media off of whatever scent it may be on to generate a story. Also, it makes him look smart by trying to make whatever reporter asked the question look dumb for not noticing the “real” reason for whatever angle the reporter is taking.
It’s page one of the coaching/media relations hand book.
Tomlin employed that tactic this week when fielding a question about Jets quarterback Mark Sanchez. Tomlin was asked why Sanchez was so good at avoiding the rush when the Jets won at Heinz Field last month. The Steelers sacked New York’s QB just once that day. Tomlin immediately rejected the implication that Sanchez did anything to account for Pittsburgh’s lack of sacks, and redirected the praise squarely at the feet of the team’s offensive coordinator, Brian Schottenheimer.
“I think it was coach Schottenheimer more than anything else. He moved the pocket. They booted him. They had some quick game,” explained Tomlin. “But it’s not anything he did specifically against the Pittsburgh Steelers. It, quite frankly, is what they do any weekend.”
I’m sure that’s the first time that Brian Schottenheimer (or any Schottenheimer for that matter) has been made out to be an offensive genius by comparison to a Steeler defense. Just ask New Yorkers! They abuse their offensive coordinator so bad, Bruce Arians probably thinks he gets off easy in Pittsburgh by comparison.
Some of Tomlin‘s players agreed with their coach‘s assessment of Sanchez.
“They (the Jets) don’t want him holding the ball that long. That’s why they run the ball as much as they do. That’s why they run so many quicks and screens,” said linebacker Lawrence Timmons.
That seems like bulletin board material for Sanchez to me. But that’s nothing new. Most in football continue to create reasons why Sanchez stinks, and why the Jets keep winning “in spite” of the second year quarterback’s abilities. All he’s done in his first two years is get to two AFC championship games. Just like a certain QB in this city. In fact Roethlisberger got edgy this week when he was asked to asses Sanchez’s impact on New York’s wins this year.
“People get on him a lot. It’s always ’Run the ball and manage the game, Mark.’ Well, no. To be a quarterback at this level and do what he’s done, you don’t just manage the game,” said Roethlisberger with a firm tone to his voice. It was pretty clear Roethlisberger was flashing back to a similar distasteful evaluation of his game when he won 15 of 16 starts his rookie season.
At least one other defensive player appeared to hold Sanchez’s performance in Pittsburgh against the Steeler pass rush in higher regard than Tomlin and Timmons.
“Mark’s playing great ball,” said Pro Bowler Brett Keisel. “He’s extremely slippery. When he feels the pocket collapse, he’s able to get out and make things happen.”
Maybe Tomlin is right. Maybe Schottenheimer’s offensive scheme beat Pittsburgh’s defensive approach. Maybe any scrub could’ve done what Sanchez did, so long as they were at least good enough to warrant an NFL contract. And if the Steelers want to explain away Sanchez’s ability to avoid their rush as nothing more than a product of New York’s system, then that’s fine. But hopefully they don’t denigrate his abilities in all areas.
Granted, Sanchez may go out on Sunday and stink up the joint. But that doesn’t mean Sanchez stinks. Sure, he’s not Ben Roethlisberger. But how many quarterbacks even come close to Big Ben anyway? If Sanchez is so incapable, how come in four victories versus Pittsburgh, New England, and Indianapolis this year he went 74-90 with six touchdowns and one interception?
And oh by the way, he was only sacked five times in those four games. Sorry coach Tomlin, that can’t all be scheme.