Can Ian Snell Revive his career in Pittsburgh? 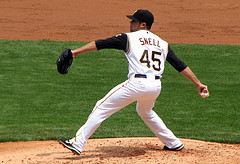 By John Perrotto
Ian Snell is on his way to Class AAA Indianapolis, which has to make Pirates’ fans happy.
The right-hander had become the paying customers’ whipping boy this season. Not that the title wasn’t justified as he was 2-8 with a5.36 ERA in 15 starts before being sent out Thursday.
He was booed heavily in his last start Tuesday night by the PNC Park crowd as he needed 70 pitches to get just eight outs in a loss to the Cleveland Indians as he was knocked out of the game in the third inning.
The boos and various stories, columns and blog posts written about how Snell has continually refused to accept any of the blame for his poor pitching finally got to the 27-year-old.
Snell claimed that he went to the Pirates and told them he wanted sent to Indianapolis in order to escape the negativity surrounding his situation in Pittsburgh.
He would be the first player in recent memory, perhaps since those wretched Pirates’ teams of the mid-1980s when the franchise’s top farm club was in Hawaii, who would prefer to play in Class AAA.
Neither general manager Neal Huntington nor manager John Russell would confirm Snell’s version of the story that he asked to be sent down.
However, one club official with knowledge of situation said, “that’s his story, not necessarily the whole story.”
Regardless, Snell is in headed back to the International League for the first time since 2005 and Huntington politely suggested that is the correct level for someone who is something less than a fierce competitor.
“The great players are able to block things out like booing but other players aren’t,” Huntington said. “He felt like he was not being supported by the fans for quite a long time. There are guys at Class AAA who are more talented than guys currently playing in the majors but things are different when you get to the big leagues and they put the second and third decks on the stadiums. Some guys handle it better than others.”
The big question now is if the Pirates can salvage Snell’s career. He won 14 games in 2006, his first full season in the major leagues, but has gone 11-27 with a 5.24 ERA in 61 starts since the 2007 All-Star break. That represents nearly two full seasons’ worth of bad pitching.
“We need to find the consistency,” Huntington said. “We need to learn to attack hitters on the inner half of the plate. Two classic examples on our major-league team right now of what happens when you do that are Paul Maholm and Zach Duke. That is probably the biggest key and the other key is consistency and command of the strike zone, throwing quality pitches in quality locations on a consistent basis. If he does that then is a good major-league pitcher.”