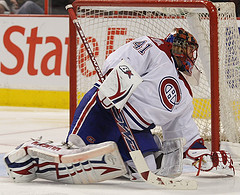 By MARK MADDEN
The Penguins could have won every game of the ongoing Montreal series, though it would have been stopped after four. They’ve enjoyed a shot edge and a territorial edge.
Yet the Canadiens have survived, forcing Game 7. The Canadiens are opportunistic. Don’t confuse that with lucky (though some element of good fortune is involved; consider the Penguins hitting three goalposts in Game 6).
Nearly every time the Canadiens get a good chance, they capitalize. The Penguins could negate some of these chances, but haven’t. Witness Game 6:
*Kris Letang loses control of the puck, then falls down. One pass later, the puck is on the stick of Mike Cammalleri, the series’ hottest shooter. 1-0, Montreal.
*Tomas Plekanec drives the net, Max Talbot loses Cammalleri, Cammalleri converts a great backhand. 2-2.
*Jaroslav Spacek, finally recovered from his hysterectomy, scores through a screen. 3-2, Montreal.
*Alex Goligoski and Jordan Leopold conspire to make Maxim Lapierre look like Rocket Richard. 4-2, Montreal.
Each goal was clearly preventable. Don’t fall down. Don’t lose your man. Clear the slot. Don’t imitate Moe and Larry.
It probably wouldn’t hurt to pay a little attention specifically to Cammalleri, either. The Canadiens have done a number on Sidney Crosby. But who to match up against Cammalleri?
Listeners (of all people) made a few good points about Coach Disco’s strategy:
*Malkin isn’t playing enough at even strength, especially given that Montreal’s main defensive focus has been Crosby. That should point to Malkin getting more 5-on-5 time, but he played just 14:12 at even strength in Game 6 (compared to 14:58 for Pascal Dupuis).
*Montreal Coach Jacques Martin is doing a fine job hiding his fifth and sixth defensemen by giving them minimal ice and finding them favorable matchups. Byslma isn’t.
A lot of this comes down to catching a break. I’ve already mentioned the Penguins’ three goalposts in Game 6. A bad early whistle negated a Malkin goal. Jaroslav Halak nearly juggled Malkin’s bad-angle backhand into the net.
The most basic strategy to be employed in Game 7 involves playing Crosby, Malkin, Jordan Staal and the Penguins’ top four defensemen a ton. Martin has shortened the Canadiens’ bench all playoffs. Using the stars more for one game shouldn’t cost the Penguins a significant energy advantage.
If it does, screw it. Win or lose with your best.
Mark Madden hosts a radio show 3-6 p.m. weekdays on WXDX-FM (105.9).