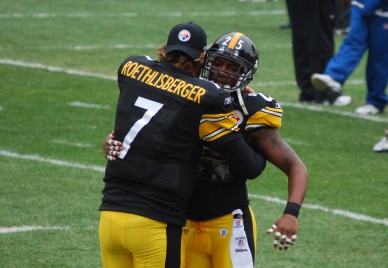 By Dale Grdnic
LATROBE, Pa. — Pittsburgh Steelers cornerback Ike Taylor has been working out on his own while his teammates practice during training camp at Saint Vincent College, and if things don’t improve dramatically in the next day that could continue into next week.
Taylor and other NFL free agents were not allowed to practice with their teams until Thursday, but Steelers player representative Ryan Clark said that since there has been no movement on changes to the NFL conduct policy the players might not ratify the collective bargaining agreement they agreed to July 25.
While there are several issues, Clark said, the main one includes the overall power NFL Commissioner Roger Goodell has to levy fines. That could not be negotiated until the players re-certified as a union. That happened last week, but since then there has been no progress despite continuing talks.
“A big issue for us is Roger Goodell having absolute control over the fines system, judge, jury and appeals,” Clark said Wednesday. “I think, for a lot of teams, it wouldn’t be as big a deal. But for us, it is.
“We’re the team that gets fined the most, and we play a brand of football that, sometimes, subjects us to his opinion. That’s something that really hasn’t been talked about. For us, with Roger Goodell having total control over the fine process, that’s a deal breaker for us in that situation.”
While the Steelers could vote against ratifying the CBA, there are nearly 2,000 players in the NFLPA and if the majority vote to ratify the deal will pass. Clark also said he didn’t expect any preseason games to get canceled.
“I don’t think the owners would let us not play the preseason games,” Clark said. “For myself, I don’t know if I want to be out there with guys you aren’t comfortable with or guys from the other team who don’t understand how to play this game. So, we’ll see what happens.
“You could have an undrafted rookie free agent trying to cut the legs out from Troy Polamalu. I don’t want that to happen, so we’ll see where this goes. But the owners are going to make their money off the preseason games. And we also get a split of that now due to the new CBA.”
LaMarr Woodley, who signed a franchise tag contract worth $10 million before the lockout began, said the Steelers are discussing long-term contract plans with his agent. But that could go on hold as well.
“I’d like to get something done, but I don’t want to sit out until next Tuesday as we wait to get the CBA ratified,” Woodley said. “We don’t know for sure what’s going on now, but I guess we’ll find out pretty quickly.”
At one point, Clark’s frustration with the situation boiled over during the media session. One reporter, ESPN Radio 970’s Joe Bendel, took some heat from Clark over a line of questioning. Once Clark defused it, he complimented himself for shutting down a perceived agenda by Bendel.
Clark then raised his hand to Bendel and told him not to talk to him any more. Bendel didn’t take too kindly to having a hand in his face, and things escalated from there. The two were separated, and cooler heads eventually prevailed.
But it never should have gotten that far in the first place.