Collins looks to have a repeat performance against the Steelers 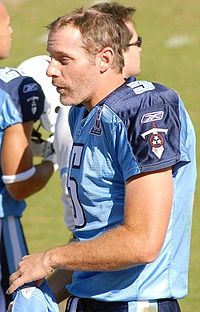 Collins went 20-of-29 for 215 yards & a touchdown against PIT
The Tennessee Titans were the last team to beat the Super Bowl Champion Steelers. With the two teams kicking off the 2009 season on Thursday, the Titans will be a challenge for the Champs.
In a pivotal game for a shot at home-field advantage, the Titans routed the Steelers 31-14 on December 21, 2008.
36 year old quarterback Kerry Collins was a difference maker in the game. The Titans were built on a dominating defense and a strong running game in 2008.
It led them to a 13-3 record in the regular season.
Collins threw for 12 touchdowns and 7 interceptions last season but as he showed against Pittsburgh , he can still move the ball down the field and win games for his team.
The 16 year veteran is looking for another big game against Pittsburgh to open the season. Collins went 20-of-29 for 215 yards and a touchdown against the leagues #1 defense last December.
The Titans were also the first team to gain over 300 yards against the Steelers in the regular season. When Titans and Steelers met, it was the 16th game of the season for the Steelers.
Collins moved the ball down the field with ease picking apart the Steelers defense with short intermediate passes, which set up the opportunity to take some chances down the field.
Collins top target on the afternoon was #1 receiver Justin Gage (5rec – 104 yds – 1TD) and Justin McCareins (6rec – 55 yds).
Gage who was lined up against cornerback Ike Taylor will be Collins go-to-guy again on Thursday.
With McCareins gone, Collins has two new targets in 09; free agent signee Nate Washington and rookie wide receiver Kenny Britt.
What kind of production the Titans get from Washington (if any) in the season opener remains to be seen.
Collins has yet to develop any kind of continuity with Washington (hamstring) who has been sidelined for the past two weeks.
Washington practiced on Tuesday and it appears he may play.
Rookie wide receiver Kenny Britt has performed well in camp will get a number of reps as the Titans #2 receiver. He will start if Washington is unable to go.
For Collins he doesn’t have to make many adjustments from his last meeting against the Super Bowl Champs. It’s the league’s #1 defense that has too.