Day 2: Roethlisberger apologizes to his teammates 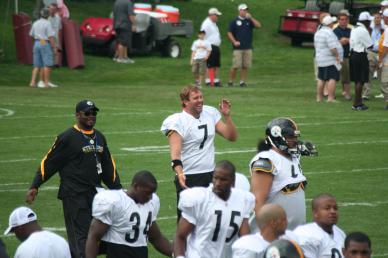 LATROBE – Although the apology wasn’t needed, Ben Roethlisberger has apologized to his teammates.
The Steelers star quarterback didn’t offer an apology for anything he did. Instead, he apologized for the intense media attention the team is getting at training camp regarding his legal issues.
Two weeks ago, Andrea McNulty, a hotel employee in Lake Tahoe, Nev., filed a civil sexual assault suit against Roethlisberger.
Roethlisberger has since denied that allegation.
“He didn’t have to do that,” wide receiver Hines Ward said. “That situation could have easily happened to anybody. We understand that.”
After Saturday morning’s practice, the first of training camp, Roethlisberger met with the media but refused to discuss McNulty’s lawsuit.
“This is football. This is what I do. I don’t know what you’re talking about,” he said when asked if a civil sexual lawsuit filed against him is a distraction. “I come here and play football.”
MILLER, HARTWIG LIMITED
As they try to fully recover to from off-season injuries, tight end Heath Miller and center Justin Hartwig were limited at the Saturday morning practice. They were in uniform and took part in several drills, but didn’t participate in any full-team sessions.
Miller had sports hernia surgery in June.
Hartwig suffered an undisclosed toe injury a few weeks ago.
With Miller and Hartwig limited, their backups _ Matt Spaeth and Darnell Stapleton, respectively _ ran with the first-team offense.
Lining up at right guard, a position manned by Stapleton last year, was Trai Essex.
Friday when he reported to camp, Essex said he was promised a fair chance of beating out Stapleton for the starting job in a training camp competition.
Meanwhile, strong safety Troy Polamalu and cornerback Deshea Townsend both practiced even though coach Mike Tomlin suggested Friday that they may be limited with minor off-season hamstring injuries.