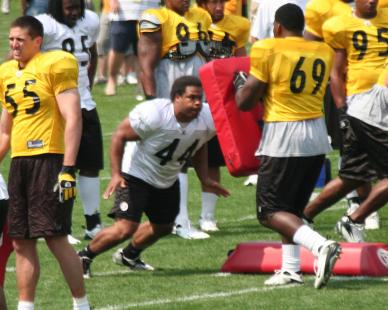 By Mike Bires
Photo: David Hague – Inside Pittsburgh Sports
Several Pittsburgh Steelers starters missed Monday morning’s practice, including offensive lineman Darnell Stapleton.
As the team worked out, Stapleton watched atop a hillside surrounding the athletic fields at St. Vincent College.
If he was hurt, why wasn’t Stapleton on the field like the rest of the players who didn’t practice?
Or was he banished for doing something wrong?
“No, they didn’t put me in timeout,” Stapleton said with a laugh. “I didn’t do anything wrong. My knee is a little sore, and they told me to stay off it.”
Friday when the Steelers reported to camp, coach Mike Tomlin said Stapleton may be limited due to his sore knee. But until today, Stapleton had been running with the first-team offense at center.
Even though he was the starting right guard for most of last season, Stapleton was playing center because Justin Hartwig has been limited with a toe injury.
“I’ll be back this afternoon,” Stapleton said.
Also sitting out the morning practice were for wide receiver Hines Ward, linebacker James Farrior, cornerback Deshea Townsend and defensive end Travis Kirschke. None of those four are hurt. But as thirty-something veterans, they were just given the morning off.
Rookie defensive lineman Ra’Shon “Sonny” Harris missed his second straight practice with a groin pull.
Meanwhile, running back/kick return specialist Stefan Logan returned to practice after missing the first to days with a mid-foot sprain. The Steelers will undoubtedly announce sometime today that Logan has been taken off the physically unable to perform list.
TAKING SHOTS AT “TANK”
Rookie running back Frank “Tank” Summers must have a bull’s eye on his back.
In the last two practices, the burly rookie running back has been involved in perhaps the two hardest hits in camp so far.
This morning on a running play, Summers had a violent collision with linebacker Lawrence Timmons.
On the last play of Sunday afternoon’s practice, Summers fumbled the football after he was drilled by linebacker Keyaron Fox and cornerback William Gay.
“When you carry a nickname like ‘Tank,’ guys are going to try you,” Tomlin said. “They want him to prove that nickname is earned. That’s the nature of the National Football League. This is a show-me game, and he’s starting to understand that.” “I guess it’s there way of saying ‘Welcome to the NFL,’ ” said Summers, who’s 5-foot-10 and 247 pounds.
SHANANAN VISITING LATROBE
For the third straight day, former Denver Broncos coach Mike Shanahan stopped by to watch practice.
Shanahan, who was fired by the Broncos after the 2008 season, will reportedly appear on the NFL Network this season to offer his NFL insights.
But he said this morning that “I want to coach again.”
Already, there are rumors that Shanahan will become the next coach of the Dallas Cowboys in 2010 if Wade Phillips is fired.