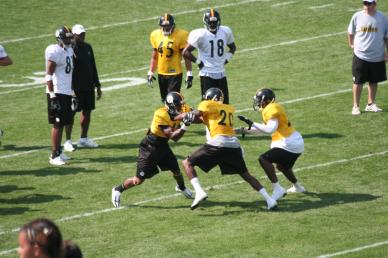 By Mike Bires
Photo: David Hague – Inside Pittsburgh Sports
LATROBE _ Stefan Logan, the tiniest player on the Pittsburgh Steelers’ training camp roster, was in his glory Tuesday morning.
During a practice devoted primarily to special teams, Logan was among five players used to return kickoffs. This is the chance he’s been waiting for.
“There’s a bunch of guys competing for that spot, but (competition), that’s what it’s all about,” said Logan, who’s 5-foot-6 and 180 pounds.
Logan’s story is certainly a fascinating one. He’s signed with the Steelers after playing last year with the British Columbia Lions of the Canadian Football League.
He played college football at the University of South Dakota, an NCAA Division 1-AA program.
And now this native of Miami, Fla., is trying out for the Steelers.
He’s listed as a running back on the roster, but is playing wide receiver at camp. He has no chance of making the 53-man roster only as a wideout or running back. He has to make it as either a kickoff returner or punt returner.
“I don’t know how I got here,” Logan sad. “I don’t know if my agent called the Steelers or they called him. But the Steelers were in need of a returner and they saw the skills I had in the CFL last year, and that wanted me to bring that from the CFL to the Pittsburgh Steelers.
“Some of the players here have said, ‘Hey, we have never seen you play before. But if they brought you here, evidently they saw something they liked in you.”
Last year, Logan ranked fourth in the CFL with 889 rushing yards.
WALLACE FIRST UP AS KICKOFF RETURNER
When the Steelers worked on their kickoff return game for the first time in camp, Mike Wallace, the rookie wide receiver, was first up as the deep return man.
The others were running backs Rashard Mendenhall and Mewelde Moore, rookie cornerback Joe Burnett and Logan.
“I was the first guy up today, but things can change at any time,” Wallace said. “It’s not that I’m looking at it like I have a secure spot. It’s a wide open competition, but I look at it as it’s my job to try to keep.
“But like I said, we have a lot of good returners and no one has a secure spot. I welcome competition at all times. If I’m the best man for the job, the coaches will put me back there. If not, I’ll just root for any of my teammates who are back there.”
ROETHLISBERGER WINS PASSING CONTEST
Often on morning workouts that are devoted primarily to special teams, the quarterbacks will engage in a passing competition.
A net is set up with three pouches. One is in an upper corner, another is in the middle and the third is in a lower corner.
Each quarterback gets three throws from various distances and locations on the field.
On this day. Roethlisberger was first with 11 accurate throws. Tied for second at 10 were backup QB Charlie Batch and Dennis Dixon. Fourth-team QB Mike Reilly finished last.
CZECH DOES IT ALL
Piotr Czech is more than just a back-up kicker.
The native of Poland who played at Wagner College in Staten Island, N.Y., Czech is also the backup punter.
That’s going to help kicker Jeff Reed and punter Dan Sepulveda during the dog days of camp.
“Because the camp roster limit is now 80 players, we don’t have the luxury of bringing in another punter,” special teams coach Bob Ligashesky said. “Because Piotr can do both, that will give us a chance to give Jeff and Dan a blow every now and then.”
Photo: David Hague – Inside Pittsburgh Sports