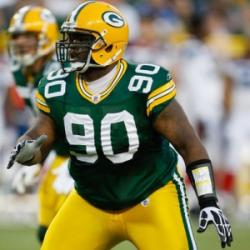 By Dale Grdnic
PITTSBURGH — The Green Bay Packers’ mammoth defensive tackle, B.J. Raji, has gained notoriety for his girth as well as his play this season.
When he fumbled in for a touchdown and then busted a quick move, a cult hero was born. Count Casey Hampton, the Pittsburgh Steelers own mammoth tackle, among Raji’s biggest fans.
“He’s a beast, man, and I like him a lot,” Hampton said. “Raji can play the pass and the run pretty well, and we’ve seen how he can move when he gets an opportunity to take it to the house like he did last week. And he has a decent touchdown dance. I’m sure mine would be a lot better if I ever got the chance.
“But he’s a good player. And I’ve been checking him out whenever we watch film. I like his game a lot. He can get up the field. I did that in my younger days, but I’m probably too old for that now. I get up and down the field every now and then, but not too much these days. He’s a big, strong guy, though, so I’d just tell our linemen to lock him up and hold on and hope you get a little help.”
They Just Don’t Get It
Steelers quarterback Ben Roethlisberger was asked by a reporter from TSN, Canada’s ESPN, “aboot” the franchise’s successful history and “how did it feel to pull on that Steelers sweater?” Roethlisberger had a quick response.
“Are you Canadian? You said sweater,” Roethlisberger noted. “That’s hockey. We put jerseys on. It’s such an honor every day to know that you play for an organization like this with ownership like the Rooneys and coaches like Noll, Cowher and Tomlin.
“And all the players who graced the locker rooms, first at Three Rivers Stadium and now here. There’s way too many to name, from the ’70s up to now. So, it’s an awesome honor to be a part of that to say that you’re now a part of it forever. It’s the greatest feeling.”
No National Favorite
The Steelers are about a three-point underdog for the Super Bowl. Wideout Hines Ward was asked if the club’s low profile was the reason.
“I don’t care about our profile,” Ward said. “We are winning ball games. There are a lot of superstars out there, and their teams aren’t winning Super Bowls. What we’ve done speaks for itself. (But) we aren’t flashy. Look at Ben’s stats. Nobody even talks about Ben being an elite quarterback in our league.
“I thought when you guys judge quarterbacks that it’s all about wins and losses and Super Bowls. He’s 10-2 in the playoffs. I don’t know why he isn’t considered up there with the great guys. We’re not a flashy bunch. We showed flashes that we can go out there and do that, but we just find ways to win games.”
The Ultimate In Position Flexibility
Steelers offensive lineman Trai Essex practiced at center this week, as Doug Legursky’s backup if Maurkice Pouncey is unavailable. If he plays in the Super Bowl, Essex would have played all five offensive line positions this season.
“It’s kind of coming full circle,” Essex said. “Just the way I started at guard and then moved to tackle. I played all four of the other spots this year in games, but not center. Maybe I’ll get to play center some in the Super Bowl.
“We’ll see, but I’ll get some reps beforehand. I came in as a guard, and then I had to go to tackle. It wasn’t too tough, though, because I studied every position. And that versatility, that’s what kept me in the league so long.”
Tickets, Tickets, Who Has The Tickets?
With several plays from Texas and others with ties to the state, Super Bowl ticket requests are at a premium in the Steelers locker room. Galveston native Hampton offered some thoughts.
“No, man, I don’t think I have the most,” Hampton said. “I mean, I might have the most requests, but I don’t think I have the most people going. I mean, you have to cut it off at some point, so that’s what I had to do. You know, you can only take care of so many people. Some might get mad, but it is what it is.”
Injury Update
Nothing changed for either team this week. Safety Will Allen (knee), cornerback Bryant McFadden (abdomen), safety Troy Polamalu (Achilles), center Maurkice Pouncey (ankle), wideout Emmanuel Sanders (foot) and offensive tackle Jonathan Scott (ribs) did not practice, while defensive end Aaron Smith was limited to just individual workouts Friday.
For Green Bay, it was the status quo as well with linebacker Desmond Bishop (ankle), offensive tackle Chad Clifton (neck), linebacker A.J. Hawk (knee), wideout Greg Jennings (knee) and center Jason Spitz (calf) limited in practice. Linebackers Erik Walden (ankle) and Frank Zomba (knee) did not practice.