Game 7: Coverting second chance opportuntities will play a “big factor” in getting to Halak 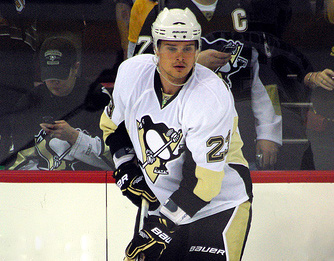 Can DeJuan Blair skate? If so get him to Mellon Arena as soon as possible. After all, the Spurs are done. And the Penguins need all the offensive rebounding help they can get.
The tactics employed when it comes to rebounding off the other team’s net (basketball or hockey) are really the same. Get ready for the puck/ball to come off. Be in the right position. Be big. Be aggressive. Put it back in.
DeJuan Blair is good at that. The Penguins are not. And tonight in Game 7 of the Eastern Conference Semi-Finals against Montreal, the Pens need to get better at it fast.
Canadiens’ goalie Jaroslav Halak and the Montreal defensemen are well deserving of the praise they have received this series. Pittsburgh has just 10 goals over the last five games (one was an empty netter).
But the Pens haven’t helped their own cause much in front of Halak. While Pittsburgh has done an excellent job of possessing the puck in Montreal’s end, and a good job of generating shots, they’ve done a lousy job of cashing in on second chances.
Most of the goals Pittsburgh has tallied in this series have been slapshots from point men such as Sergei Gonchar or Kris Letang. Jordan Staal scored on a slap shot too. Max Talbot had a breakaway. Bill Guerin tipped a slapper in mid flight. Matt Cooke made a nice move on a walk in. Guerin and Pascal Dupuis have empty netters.
But very few Penguin goals have come as a result of rebound opportunities or loose pucks in front of the net. Sidney Crosby managed one of those goals in the first period of game six. He batted a rebound out of mid air to tie the game at 1-1.
“You talk about getting to the net. And we’ve done a pretty good job of that. It’s hard to get there. You just have to maintain that attitude that you are going to get there and you are going to put pucks in,” said Crosby Tuesday morning.
Sure, attitude is a part of the equation. But so is execution. And make no mistake, for as good as Halak has been, he’s left many rebounds in front of the net that haven’t been too scary because the Penguins have been absent from the area, fumbled the puck, tried to make a dumb pass, or fanned on shots entirely.
This was an issue in the first round against Ottawa. Yes, Pascal Leclaire made 50-something saves against the Pens in that triple overtime game. But it felt like 40-something shots turned into rebound chances that the Penguins couldn’t finish.
“I think we’ve done better at that since this series has gone on. But we need to look to pick up more pucks in those areas,” said coach Dan Bylsma. “That’s going to be a big factor (in Game 7). Second chance opportunities. Winning those battles around the net.”
A player who…in theory…should help is Alexei Ponikarovsky. At 6’4” and 225 pounds, he’s the big body Pittsburgh acquired at the trade deadline to help be a net front presence in the offensive end. But he has shown absolutely no ability or willingness to do that job.
Hence, he has been scratched the last two games. But he Ponikarovsky skated on a line with Evgeni Malkin and Bill Guerin today.
“I have to be there. I have to be in front of the net screening the goalie and getting to those rebounds,” said Ponikarovsky after morning skate.
It sounds like a simple task and a simple message. But apparently it’s easier said than done. Because the Penguins haven’t had much net presence since Ryan Malone left after the 2008 playoffs.
Maybe they should just get him back instead of teaching Blair how to skate.