Grdnic: A positional look on offense at camp surprises and how depth chart could play out 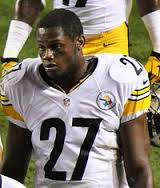 By Dale Grdnic
LATROBE, Pa. — Instead of highlighting a specific position battle or player feature, here’s a look at the depth chart and some possible surprises on offense during this training camp at Saint Vincent College.
Quarterback
This position is playing out basically how everyone thought when camp began, so there really aren’t any surprises other than how much starter Ben Roethlisberger has played. Sure, his reps have been limited, on occasion, but he has not missed a day and has taken care of his arm. He also ices his right knee daily and has not really gotten hit. He’s as healthy as he could be at this point.
Bruce Gradkowski has done a solid job as the backup, while Landry Jones and John Parker Wilson are battling for the third spot. It’s going to be tough to keep Jones from taking that, which would be the end for Wilson, who is out of practice squad appearances. Gradkowski is not big, but he has a strong arm and solid leadership qualities. He is a more than capable backup.
Running Back
Baron Batch has made a strong pitch to make the final group. Isaac Redman and Le’Veon Bell are locks, and I believe LaRod Stephens-Howling is in the mix as well. So, Batch and Jonathan Dwyer should be up for the final spot, and Dwyer just hasn’t shown too much. He also can’t play special teams, so his contribution is limited, which makes him expendable.
Tight End
Will Johnson belongs in this category, because he probably won’t run the ball too much. But he can be a devastating blocker. Heath Miller will remain on the 53-man roster to start the season and likely be held out the first few games like Rashard Mendenhall was last season. Matt Spaeth and David Paulson have something to offer as well, but if both can’t make it Spaeth should go and Paulson should stay due to his tremendous upside.
Wide Receiver
At first glance, there doesn’t appear to be many spots open at wideout, but I believe the Steelers will keep five guys on the 53-man roster and two on the practice squad. Antonio Brown, Emmanuel Sanders and Jerricho Cotchery are the top three. They will get the most reps and passes thrown their way.
Some believe Plaxico Burress is a lock as well, but I do not.
In fact, I don’t think he’ll make it. He doesn’t play special teams and does not catch the ball well enough with his hands to be a threat in the red zone. What he can still do is catch a pass across the middle or a slant, guarding the ball with his body, and run with it. He is still in shape and could play somewhere, but not here.
That means Markus Wheaton and Justin Brown, draft picks from this year, have a shot. Wheaton will help in the return game, and Justin Brown is a special teams player as well. Derek Moye and David Gilreath are other candidates for the final wideout spots or the practice squad.
When asked about young players who impressed him so far, it was no surprise that cornerback Ike Taylor mentioned a handful of defensive players. However, he also put Wheaton in that category for his athleticism and toughness.
Offensive Line
The starting five is set with center Maurkice Pouncey, guards Ramon Foster and David DeCastro and tackles Marcus Gilbert and Mike Adams. The depth chart is a little sketchy after that due to inexperience. John Malecki and Kelvin Beachum are locks because of their versatility. Malecki is the backup center and can also play guard, while Beachum has played all five spots.
Beachum likely would be the first player off the bench if a guard or tackle is injured, and Guy Whimper is in the mix only because of his experience. He has not secured a spot with his play, however. Rookie Chris Hubbard and first-year pro Justin Cheadle are listed as the backup guard, but Cheadle is a bit ahead since he already played for Steelers line coach Jack Bicknell with the Chiefs.
The guard position probably would be all right if any of those guys had to play in a game, but tackle is another story. After Whimper, the only other player with considerable experience is D’Anthony Batiste, but he epitomizes the term “journeyman.” This is his eighth NFL season, and the Steelers are his seventh team. Joe Long and Mike Farrell are other tackle candidates, but they probably are more likely to be added to the practice squad.
Things could change if someone stands out in the preseason games, but this is how it looks halfway through camp. The defense will be covered Thursday.