Grdnic: Players say offense will stay balanced with Roethlisberger back 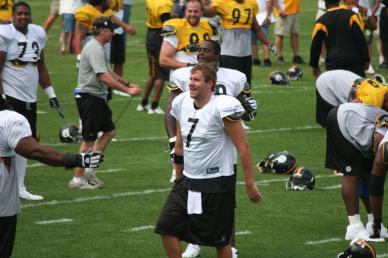 By Dale Grdnic
PITTSBURGH — The Pittsburgh Steelers are last in passing offense in the NFL, 32nd among the 32 teams, and it really isn’t that close.
The Steelers average just 136 passing yards per game, just four-tenths behind the pitiful Carolina Panthers, but no team is anywhere near their miniscule 51 completions, 81 attempts and three touchdowns.
Many believe those numbers should increase markedly, as quarterback Ben Roethlisberger returns from a four-game suspension to lead the Steelers (3-1) against the Cleveland Browns (1-4) Sunday at 1 p.m. at Heinz Field.
Count the several dozen media members who descended upon the Steelers locker room Wednesday among that group, as representatives from ESPN, the NFL Network, TSN in Canada, USA Today and the Los Angeles Times, along with the usual hoard of local newspaper, radio and television reporters, bombarded the players with various Roethlisberger-related questions
“Everybody has welcomed him with open arms, and we’re looking forward to working with him to get ready for Cleveland,” Steelers wideout Hines Ward said. “No disrespect to the other guys. They did a phenomenal job, but we are a better ball club when he’s in the game. So, it’s great to have him out there.
“(But) we just have to be balanced. We’re not going to shy away from the run, because Rashard is running excellent. He’s having a phenomenal year, so … we’re not going to change our offense or change our identity. We’re still going to commit ourselves to the run, but Ben gives us some plays when protection breaks down and be able to make plays outside the pocket.”
The Steelers haven’t really had that option during their opening four games. Since Byron Leftwich is relatively immobile, the Steelers gained a lot in that area when Dennis Dixon replaced him. But Dixon limited the offensive playbook immensely overall. That improved when Charlie Batch took over, but the club’s vertical passing game did not improve much.
Now, with Roethlisberger at the helm, the Steelers are a threat to go deep and stretch the field as much as possible. And this has running back Rashard Mendenhall’s eyes opening wide.
“Sure, it’s noticeable that opposing teams were stacking the box against us and just in their whole demeanor against the run,” Mendenhall said. “So, you feel like they don’t respect what we do. (But) now, we can attack them in different ways and be more balanced.
“So, that should help the running game as well as our passing game to have Ben back in there. … We missed some things, some blitzes, last year. So, we have to be ready for anything they can put up against us, but I think we’ll definitely be more prepared this year.”
Balance was the operative word in the Steelers locker room Wednesday, but for the club to have close to an even amount of passing and rushing attempts the passing part would need to improve immensely. The Steelers are 29th overall in total offense, but eighth in the league in rushing with 133.5 yards per game.
And Mendenhall is seventh in the NFL with 411 rushing yards in four games, but third with an average at 102.8 yards per game. So, with a vertical passing threat in Roethlisberger, Mendenhall should get a little more running room and might even be a factor in the passing game as well.
“I don’t think we’ll throw more than we run now,” Steelers left offensive tackle Max Starks said. “I think it will be more balanced. It’s been successful thus far into the season. And you know how it is: ‘If it ain’t broke, don’t fix it.’
“So, that’s a good equation. If we can’t run, we certainly have an option to pass, but I think we’ll stay as balanced as we can. … We always had that confidence that we could do both, but with Ben back it allows us to do more things, because we have our entire team at our disposal.”
Roethlisberger certainly didn’t expect to air it out that much, either, but he acknowledged that the club won’t be afraid to do whatever’s necessary for the offense to be successful.
“We’re going to take what they give us,” Roethlisberger said. “If they load up the box, we’ll try to throw it. If they’re sitting back, we’ll run it. (But) we don’t want to force anything. That’s the last thing I want to do.
“I can’t go out there and try to be Superman. I just have to go out there and play my game (and) try to win the game. That’s all that matters.”
And with Roethlisberger back at quarterback, it follows that the Steelers shouldn’t have to rely only on their defense to accomplish that goal.