If cleared to return, should Crosby risk coming back for the playoffs? 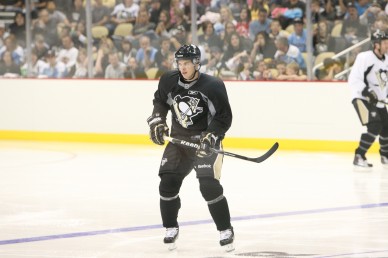 By Tim Benz
We can put a few rumors to rest about Sidney Crosby now. First of all, SIDNEY CROSBY NEVER HAD A TUMOR.
Sidney Crosby was also never considering retirement.
Sidney Crosby was never suffering from a mystery illness. Nor was he abducted by aliens. Nor was he a Canadian spy. Nor are he and Evgeny Malkin being cloned and replaced by body doubles.
Although, that would be interesting. Maybe one of the two body doubles would actually give up the right circle on the power play.
Sidney Crosby is just trying to get over a really bad concussion. And he had to shake some initial pain in his neck too. Now the only pain in his neck remaining appears to be incorrect radio reports from Toronto.
Now let’s clear up another rumor: Sidney Crosby is not coming back for sure either. But he’s trying. And that’s news. Because for a while, between all the rumors, and speculation, and borderline slander… there was some truth. And that truth was the Penguins were preparing for life without Sid until training camp.
In fact, they still are.
“In terms of planning towards the future and towards April, I have not thought about making a plan with Sidney Crosby. That’s not to say I’ve thought about ruling him out. But that’s not the approach right now that we’ve taken. We’re playing with the guys in the room,” declared Penguin coach Dan Byslma a few hours after Crosby took his first skate on Consol Energy Center Ice in two months.
But the fact is, Byslma doesn’t really need “a plan.” We’re talking about Sidney Crosby. When he’s ready to play, put him in. Play him a lot. And be thankful you are there to watch. Bylsma knows that. And clearly that’s what he’ll do.
The question remains though… can Sid be ready in time for the playoffs The rest of the regular season seems like a foregone conclusion. Between now and then, the Pens are going to have to trudge along without #87 in the same manner they have since early January.
So will the former MVP be able to suit up in time for the post season? After merely 15 minutes of skating in full gear, Crosby was not ready to speculate about such lofty ambitions.
“I’m nowhere close to where I need to be as far as being in shape. I’m not even going to talk about that,” lamented Crosby at his stall in the new arena. “I just want to get through that (i.e. skating today) without getting a headache, let alone worrying where my conditioning is at. That’s whole, whole new level.”
The argument now becomes more than just whether or not Crosby can make it back into the line up. The argument is SHOULD he come back into the line up. There is very little wrong with suggesting that Sid’s injured brain and out of shape legs could benefit from an extended off season of recovery.
The last thing Crosby needs is another blow to the head or significant muscle tear because he came back too fast. But a pro athlete’s an unspoken code of conduct (and personal drive) usually leads to the same decision: When I’m healthy enough to play, I’ll play.
“You listen to yourself and what’s going on. You provide doctors with the most information you can and trust them in what they are telling you,” said Crosby.
That’s sounds like an ambiguous way of saying: “When I feel I can play, I’ll play.”
Maybe that will be a month from now in a hard hitting best of seven series against Washington. Maybe it’ll be next fall in a season opener against the Senators.
Keep this note in mind. Today was exactly four weeks before the end of the regular season. Maybe Sid, his doctors, and the team said: “Ok, you are finally symptom free, Kid. See how you are feeling in a month, and we’ll make a final call before the playoffs start. If you can go…great. If you can’t, see you at Southpointe towards the end of summer.”
That’s the kind of speculation surrounding Sid’s health that may actually make some sense.