Infielders Preview: Pirates banking on Clement to be a power hitting presence in their lineup 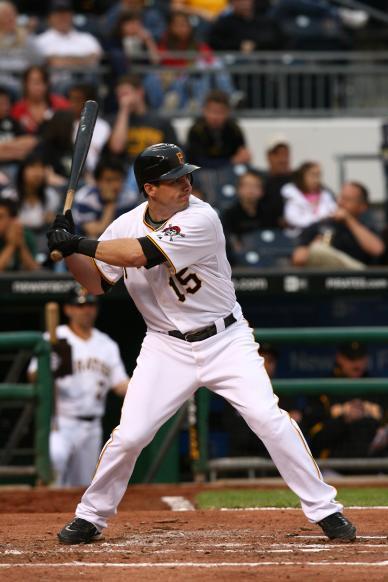 By John Perrotto
Photo: David Hague – Inside Pittsburgh Sports
The Pirates will likely have a new right side of the infield on opening day and their left side could a transitory pair that will be holding places until two of the organization’s better prospects arrive in the major leagues.
The Pirates are banking on Jeff Clement to not only become their starting first baseman but a power-hitting left-hander in the middle of their lineup. He was the key player of the five acquired from Seattle last July in the trade that sent Jack Wilson and Ian Snell to the Mariners.
Clement hit 70 home runs in three seasons as an All-American catcher at the University of Southern California and was the third overall selection in the 2005 amateur draft. He has also hit well in the minor leagues but flopped at the major-league level.
Perhaps Clement will turn into the player the Pirates hope but he is not a kid at 26 and there are plenty of scouts who are highly skeptical.
Second baseman Akinori Iwamura was the Pirates’ major off-season acquisition as they received him from Tampa Bay for reliever Jesse Chavez.
It was an odd trade for the Pirates to ship a promising young reliever for middling 31-year-old second baseman and showed that general manager Neal Huntington might be developing some frightening Bonifayan or Littlefieldian tendencies after spending most of last summer trading middling veterans for youngsters.
Iwamura is a decent fielder and hitter but the Pirates could have found a similar player at less than his $5-million salary.
Andy LaRoche is back to hold down third base until the Pirates’ top prospect, Pedro Alvarez, arrives from Class AAA Indianapolis some time after June 1. LaRoche has turned into an excellent defender but his offensive output is subpar for a corner infield.
Yes, he had six home runs and 20 RBIs after Aug. 28 last season but most of the games had no meaning and an intensity level just a click above an intrasquad scrimmage.
Ronny Cedeno showed considerable promise after coming to the Pirates in the big trade with Seattle as he hit .299 in August but then had his September ruined by a broken pinky and strains of both hamstrings. Cedeno had a big winter ball season in his native Venezuela with 10 home runs in 150 at-bats.
He has the tools to be an above-average defending with very good range and a strong arm. More than other Pirates player, the 27-yearr-old seems poised for a breakout 2010.
Bobby Crosby was signed as a free agent to serve as the primary utility man as he can play all four infield spots along with the two corner outfield positions. However, he has been basically worthless with the bat since hitting 22 home runs for Oakland in 2004 when he was voted the American League Rookie of the Year. His sickly .652 OPS last season was amazingly his highest mark since 2005.
Ramon Vazquez no longer has the range to adequately play shortstop, which limits his uses as a utility infielder, particularly after he undergoing arthroscopic microfracture surgery on his right knee last November.
He wasn’t much of a factor last season and figures to be marginalized even more this year.
The Pirates do have some flexibility should they sustain injuries in the infield. Garrett Jones is slated to play right field but his natural position is first base.
Outfielder Delwyn Young spent the last two months of last season as the Pirates’ starting second baseman. Iwamura won six Gold Gloves as a third baseman in his native Japan.
A wild card as a utility player is Neil Walker, who is no longer the third baseman of the future with LaRoche ahead of him and Alvarez ready to pass him on the depth chart this spring.
Walker, drafted in the first round as a catcher in 2004 from Pine-Richland High School, will see action behind the plate this spring for the first time since 2006 will also be tried at first base, second base, left field and right field.
Walker looked totally overmatched in his major-league debut last September and it has become clear that he probably will not be a regular in the major leagues. If it weren’t for being a wonderful kid and a hometown guy, Walker would be mentioned prominently with all those other wasted first-round picks by the Pirates.