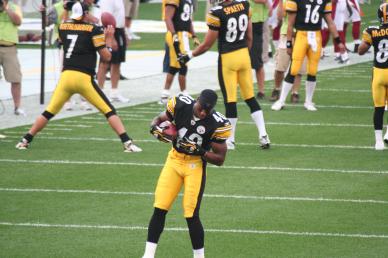 By Mike Bires
If there was any doubt about Stefan Logan making the Pittsburgh Steelers’ opening-day roster, the “Half Pint” doused them Thursday night.
In a 21-10 preseason win over the Carolina Panthers, Logan was easily the No. 1 storyline.
On just the fourth play of the game, Logan returned a punt 80 yards for a touchdown.
His spot on the 53-man roster was cemented with one electrifying splash play.
“That’s the beauty of the National Football League,” coach Mike Tomlin said after the Steelers finished exhibition play with a 3-1 record. “There are a bunch of those stories, guys seizing the moment. He ran one back. It’s a beautiful thing. I’m happy for him.”
Logan, a 28-year-old rookie who played running back last year in the Canadian Football League, also returned a kickoff 28 yards. He also took several snaps at wide receiver where he dropped a pass but ran on two reverses for gains of 14 and 13 yards.
“It was my last preseason game, and Coach (Tomlin) said put to something on tape, because it’s going to be a hard decision for the coaches when they have to make cuts,” said Logan, who’s only 5-foot-6 and 180 pounds.
“It’s going to be a big day for them. They have to evaluate a lot of players. So I knew that once I got in, I had to do everything I could.”
As usual in the fourth and final preseason game, the Steelers’ first-stringers hardly played. They played just one series before Tomlin turned to the reserves, many of whom were fighting for rosters sports.
And there were no less than five starters who weren’t even in uniform.
They were: wide receiver Santonio Holmes, who’s recovering from a bruised back; running back Willie Parker, who’s been troubled with a tweaked hamstring; fullback Carey Davis, who sat out with an ankle injury; linebacker Lawrence Timmons, who’s also out with an ankle injury; and linebacker James Harrison, who was held out even though he’s not hurt.
Beside Logan, two other “fence riders” as Tomlin calls those fighting for rosters spots may have clinched roster spots.
One was rookie running back Isaac Redman, who rushed for 79 yards and scored the Steelers’ second touchdown on a 10-yard run. The other was second-year free safety Ryan Mundy, who returned an interception 31 yards for a TD.
“I’m not going to make decisions tonight,” Tomlin said when pressed by reporters to talk about the likes of Redman, Mundy and other Steeler wannabes. “I’ll make them tomorrow.”
The Steelers have until 6 p.m. Saturday to trim 22 players. But as Tomlin suggested, those cuts may be made Friday.
Tomlin will address the media at a 4 p.m. press conference Friday to discuss next Thursday’s regular-season opener against the Tennessee Titans. He may also announce some or all of the cuts.
One guy who won’t be cut is Logan.
“It will feel good to make an NFL squad,” Logan said. “Like I said, the coaches have to come in and evaluate the tape and see who they’re going to keep. It’s going to be some tough decisions for the coaches.”
But it won’t be that tough to keep the “Half Pint” who wears No 41.