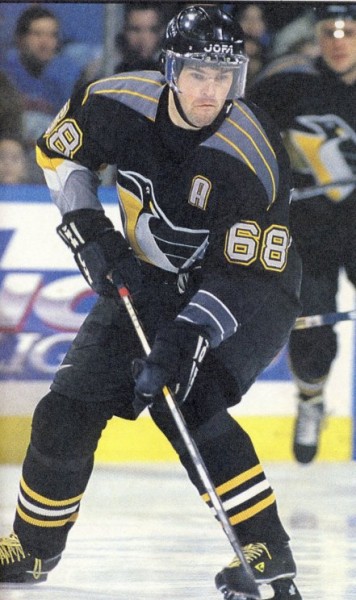 Where do you suppose Sidney Crosby will be in 2031?

Will he still be playing in the NHL at 44 like Jaromir Jagr?

Think he’’ll score 25 or more goals at that age?

Jagr, who may be the most amazing major pro athlete in North America right now, scored his 25th in the Florida Panthers’ win over Tampa Bay Saturday night.

It’s hard to imagine Crosby saying he’d like to play another 15 years, but 15 years ago Jagr probably didn’t imagine himself still playing in 2016.

Jagr is still playing because he’s still having fun. Except for his last year or two with the Penguins, Jagr has always looked like a kid who’s really enjoying his time on the ice.

But, what is the baseball equivalent of a 44 year-old hockey player scoring 25 goals? Let’s not count Barry Bonds because of the juice.

And it’s not just the raw numbers, when Jagr is taking a shift, he’s often the best player on the ice. And Jagr seems to have every intention of playing again next season.

He’s playing for a team that is leading it’s division in a place where old people with sore bones go to get re-energized.

And that brings us to another question.

Who is the second best player in Penguins history?

Because of what Jagr is doing at 44 and because of Sidney Crosby’s excruciatingly slow start to this season, Jagr, around December and January, was probably the consensus Number 2 All Time behind Mario Lemieux among the media and fans.

Obviously a good case could be made for Jagr and no sane person would predict that any other player could do what he’s still doing at his age.

Crosby played in his 700th game Saturday afternoon. He had scored 334 goals and had 596 assists going into Sunday’s game with the Rangers, where he scored a goal.

Crosby scored his 931st point against the Rangers Sunday in his 701st game.

Yep, after 700 games Crosby and Jagr had exactly the same number of points.

There are plenty of variables. Jagr played with a lot more Hall of Fame talent than Crosby, although Malkin and Letang aren’t too shabby.

Would you settle for a tie? I mean, come on, they had the exact same point totals after 700 games.

It’s hard to imagine Crosby sticking around long enough to come close to Jagr on the all time scoring list, where Jagr is in third place, 27 points behind Mark Messier.

If you have to be told who’s first, you stopped reading this column a long time ago.

So, Jagr would only get the edge because of longevity but, since Crosby is one of those from-another-planet kind of guys, you really can’t be sure that he won’t decide to play into his forties.

Jagr may be the Penguins second best player ever but it’s a long, long way from a slam dunk. And Sid is still a kid.

— Imagine if the lockout that produced a salary cap in the NHL before the 2005 season had taken place in 1999 or 2000. Would Jagr still be a Penguin?

Local hockey fans are pretty lucky to have had three of the best players ever to lace on skates playing here for what will probably amount to 40 years.

-The Pirates and Major League Baseball are getting exactly what they deserve for opening day this Sunday. The forecast calls for a high of 40. That’s what you’re asking for when you open on April 3rd in Pittsburgh.

-I wonder how Roberto Clemente would have felt about a Major League team playing in Havana with the dictator and the president doing the wave together.

Pens get in on Yakapov in the off-season? Change of location could do this kid wonders

You should repost that in english – just for shlts and giggles.

Jagr also fourished in the clutch and grab, as well as the chainsaw era hockey.

Coincidence that Pens really turned it on once Savard was healthy?

king has been mighty quiet lately – he must be working the phones.

The thing with Jagr, in 98-99 he was on a line with Jan Hrdina and Kip Miller, with defense minded coach Kevin Constantine, and still won the Art Ross.

I think that’s a very valid point strike, all we ever hear about Sid when he struggles is that his linemates hold him back or that the coaches horrible system cripples his ability to produce but the truly great players like Lemieux and Jagr found ways to produce at an elite level and be the greatest regardless of the circumstances around them. Lemieux and Jagr didn’t need the stars to align perfectly to be the greatest, they were just great.

But but but but yogurt said he played with Lemieux and Jagr! He didn’t say anything about Kip Miller and Jan Hrdina!

Not to mention when Mario was healthy Jagr spent most of his 5 on 5 time with Francis and winger! Francis was a very good player himself but he was no Mario

That noted.. its not like Jagr hasnt experienced slumps even when he was the Art Ross guy

No one is talking about his time with the Caps you fucking idiot. This is in regard to his impact as a Penguin vs Crosbys.

Late, so tough to check with team and agent, but hearing NCAA top-scoring D Ethan Prow will join PIT tomorrow.

Is that homepage Jagr picture from Sega Genesis? NHL 93 or 94?

Sam, who are some of the posters who were drooling over TK. I want names!

Jagr because of years played.

Sam had sex with a stick of butter

Butter 2 mouth is a growing fetish among French Canadians

I love the assumption that Jagr never did any illegal substances. Not saying he did but who was paying attention in the 90’s and what are the regulations in the KHL? Again, just proving how little research goes in to these fluff pieces.

here is another thought. how about this? the 2009 conn smyth version of evgeni malkin > jagr and crosby.

the real title of this column should read “lemieux group blew it when they were waiting on the tyler kennedy situation before making an offer to jagr”.

sad part is there were few here drooling over TK for a while thinking he had top 6 potential when i wanted that bum gone since 2010 .once again apparently same was wrong again

No one ever, at any point in their life, drooled over Tyler Kennedy, you moron. BTW, how is Zatkoff doing in FLA? We haven’t heard any updates.

are you kidding me there were people here saw tk as top 6 potential and found his play energetic and entertaining to watch .people also wanted him back because he was clutch goal scorer

If there was someone here that saw top 6 potential in Kennedy, they were few and far between. And it’s still not as dumb as someone (who shall remain nameless) claiming a retired Martin St. Louis would have been a better fit than Kessel.

the pens organization told jagr they were waiting on kennedy to make up his mind before they would contemplate a deal with jagr. it can be assumed that shero and dicksco were drooling over kennedy.

The only person to ever drool over TK, was TK. Nobody misses that mouth-breathing, moped riding, one-move, ass-clown. The end.

jagr was centered by mario lemiuex, ron francis, and martin straka. all of those guys were 100x better than kunitz and dupuis. sid’s a more complete player who back checks really hard. however, jagr was definitely feared more by his opponents and the opposing goaltender. overall, if i had to pick one, it would be eenie meenie i don’t care. they both rule.

I am sure Stan will disagree with you .then again i bet he was one of those fools that also ran jagr out of pittsburgh as well

Who ran Jagr out of Pittsburgh? Oh – that’s right. Jagr did. Cause he demanded to be traded. Twice. Idiot.

I saw both and both are excellent. I would take Jagr just because he took over games with his skill. You dont score 750 goals because the goalies pads are smaller.

also Jagr era the Defense used their sticks as if it was Axes .not like now a days sisi league you get a stick on the hand and drop your stick in order to get power play

pens had the chance to bring jagr back when he came back from KHL
I guess shero and group didint want to pay him 4.5m and wanted him to be 3rd line player

Jagr has more points this season then his rookie year

jagr is a beast