The Steelers are a better bet than the Broncos according to the Westgate Superbook in Las Vegas. They are 8-1. The Broncos are 14-1.

You can also get 8-1 on the New England Patriots and the Seattle Seahawks.

The Carolina Panthers are 10 to 1.

The Steelers are in pretty good company with the Patriots and the Seahawks, but do they belong in that company?

And do you like the Steelers’ chances of winning the Super Bowl better than the Carolina Panthers’ who are 22-5 since Week 14 of the 2014 season and will be bringing back the league MVP to play quarterback?

Von Miller, Super Bowl 50’s MVP, is an unrestricted free agent and the Broncos aren’t letting him go, which means their defense will start the 2016 season as the best in the league.

Everybody around the NFL loves the Steelers offense and the wise guys in Vegas seem to love it just as much. And why shouldn’t they?

If Ben Roethlisberger, Antonio Brown and Le’ Veon Bell are healthy, they are just about unstoppable.

But everybody may also like the Steelers’ defense a little too much.

It played a lot better than anybody expected it could but it ran into six consecutive backup quarterbacks in weeks 10 through 15.

Could the Steelers’ offense have done better than the Panthers’ offense against the Broncos yesterday?

After watching Cam Newton gag Sunday, I think it’s fair to say that Roethlisberger is a better quarterback than he is and Roethlisberger put up some good numbers against the Broncos. Although they played without most of their starting defensive backfield in the regular season game.

I have to admit that I didn’t see a lot off Newton during the regular season, but I did see his highlights and his stats and I called him the best quarterback in the league.

I changed my mind. Not only do I think Roethlisberger is better, I wouldn’t take Newton over Russell Wilson of Seattle.

Yeah,that was a great defense Newton played against yesterday, but he overthrew some wide open receivers. He gagged.

But, if you’re going to bet on the Steelers winning Super Bowl 51, you’re betting on a defense that wasn’t nearly as good as it looked the second half of the season.

That’s a defense that will have to face the Patriots, Cowboys and Giants at home next season, not to mention the Bengals, who had them beaten with A.J. McCarron at quarterback and the Ravens, who beat them with Ryan Mallet.

The Broncos won’t have Peyton Manning next year, but he had little or nothing to do with their Super Bowl win on Sunday.

They also look like a better bet than the Steelers right now. 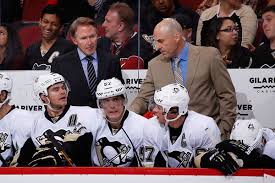 Johnston had lots to do with Crosby’s struggles, players admit to having fun again

-Do you think Sidney Crosby’s back? Do you think his former coach, Mike Johnston, might have had something to do with his embarrassingly low production over the first two months of the season?

Since Johnston was fired on December 13th, Crosby has played 22 games. He’s scored 16 goals with 14 assists.

Thirty points in 22 games is an average of 1.36 points per game.

Crosby’s career average before the season was 1.36.

Last season, with Johnston as his coach, Crosby averaged 1.09 points per game- low for him but the best in the league.

Crosby [hide] appears to everybody to be on fire right now and he is compared to where he was at the beginning of the season, but it should tell you just how good he is when you consider that he has produced even more points per game over his previous 10 seasons than he has during this hot streak.

In his last 10 games, Crosby has 10 goals and eight assists. That’s a Lemieux-like 1.8 points per game.

That should stop the “Take away the C” talk for a while.

–Kris Letang said on Monday that he’s having more fun playing under his new coach, Mike Sullivan and you can see why.

He had one goal and 13 assists in 25 games under Johnston.

The decision to change coaches on December 13th looks like a pretty good one right now.[/hide]

Draft Eli Apple/Kendall Fuller round 1, Austin Johnson/Adolphis Washington round 2. Karl Joseph round 3. Sign Eric Weddle and we goin to da bowl. Weak TE class, Hunter Henry in rd2 might be hard to pass up.

What’s going on with Ian Cole? Is he a healthy scratch or injured?

Why is gayjoy playing over him?!

It’s not good enough he should still be traded according to Stan .apparently there are other players in this team that are worth their paychecks.

Just like that crosby is tied 5 place with points. Trade this fool already. Just like Stan and npls mom. That they get traded places between Homewood and McKeesport

How many times are you going to post this same thing? You’re a gutless bitch and really shouldn’t even be allowed to talk. You’re a disease to society.

You do realize that this output literally makes hoe awful he was the first 35 games and its effect on this team look worse, right? Like how bad he played looks more hideous with each passing game that he actually shows up. It also cements him as a coach killer considering he was playing to get his coach canned. What a leader.

Remember I wanted crosby to be traded too just like u wanted Stan. But I said hope he gets traded because you dickbag fan base don’t deserve this super star. Funny how people wanted him gone now riding him again

Sid blew “her” for roughly the first half of the season

You’re right Sam. despres has really shut the pens down tonight. Unlike gayjoy

There I saw kessel tbj

Kessel was probably blowing his mom too.

I wonder if they will take Letang to the burn unit.

And what about the other 3/4 of the season when they took turns blowing your mom?

Oh man. How many games is this French twat going to miss this time?

A ghost? I see Kessel out there but can’t see to find 58. And we score as soon as Letang leaves. Classic. His last 2 notable plays were handing the Ducks a goal and walking to the locker room.

You see kessel more often because he creates offsides.

I see a lot of yellow dots. Oh wait its empty seats

Is this all you have to do is sit on TIOPS 24/7 and post nonsense?!

Where were you at he 25 game mark, tubbs?

Nice assist by Letang on that Getzlaf goal

That was an impressive turnover. He’s so good at those.

Ya I just dont get why you dont just shut the fuck up already. I becomes annoying that I see this same dumb fuckery out of you nightly. You actually make hard to like players. just leave, take your yoda blow up doll and fuck off. You add nothing to the conversation. Between you and the green bastard its the exact same commentary every single solitary day. You don’t get how much you are the source of the nonsensical replies. You’re that fucking stupid… leave it alone fuck tard

So it’s okay with Stan and npls stupidity every night

There is an incredibly valid argument to be made about relying on Letang to stay healthy… this is why that comes up. I am sure most get his value when he plays but he is a wild card. I dont wanna see him move as a fan of him BUT of he cannot stay healthy its for the best of the team. Your biggest issue is you havent clued in to how much shit is said on here just to get a ride out of you simply because you continue to sound like a broken record night in and out.… Read more »

Have no fear, the Swede and the American will clean up for the Frenchy F ups

Any way pens can kidnap Despres and ship Gayjoy with the ducks after tonights game ?

not as bad as Gayjoy

Yeah. As bad as gayjoy. And he’s French. Which makes it worse.

So what we learned from DePaoli today is that Big Sack isn’t the only great QB to choke in the playoffs. And Crosby is at Coach Killer.

Your pet names for athletes are hysterical. Real knee-slappers.

You only watched his highlights and called Cam Newton the best QB in the league. Then you watch one bad game against the best defense in the league and change your mind. Your credibility, somehow, someway, lowered today.

Credible columnists are not reactionary. They do research, they develop opinions based on factual evidence.

D you forgot to mention under MJ pens had less games losing by a wide margin .while with Sully when pens lose they lose by letting in a lot of goals

dude they still lost. Meanwhile, with the new, competent American coach, the Pens are playing their best hockey and are climbing the standings. But hey, when they lost all the time with MJ, it was JUST by one goal!

i have Gibson and Fleury in my hockey pool i can only use one tonight. should i go with Gibby since pens roster is not that deep

I hope you went with “gibby”. You ever get him and “Nathan” in a three way?