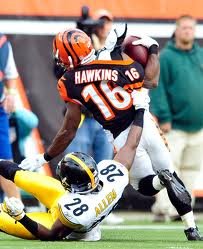 By Dale Grdnic
PITTSBURGH — Fortunately for the Pittsburgh Steelers, third-year cornerback Cortez Allen plays a lot better game than he talks.
Allen, the main reason the Steelers did not offer free-agent cornerback Keenan Lewis a new contract after he started for them last season, is slated to be his replacement opposite veteran Ike Taylor.
“Cortez, he don’t say too much,” Taylor said. “So, he’s a lot different from Keenan in that way, but they’re both good players. (And) if Cortez Allen can stay healthy, he’s going to be hell for a lot of people.
“He pretty much has everything you’re looking for, as far as a cornerback is concerned and being a shutdown guy. So, if he can stay healthy, he’s going to be hell for a lot of people.”
Allen has only missed one game each during his opening two NFL seasons, but he has been banged up quite a bit and missed a lot of practice time as a rookie and last year as well. Still, the Steelers have faith in Allen’s ability and the progress that he made to put him at the top of the depth chart at left cornerback. Allen has embraced the opportunity.
“I think I’ve shown an ability to make plays in our defensive system here, and I’m just trying to work hard every day here so I can get better to help our team win football games,” Allen said. “That’s the best thing any of us can do, improve our game to help the team win games.
“I guess a lot of people wondered how I would do when I got to the Steelers, but I’ve learned a lot the past couple years from guys like Will Gay, Ike, Troy and Ryan Clark. I had a good foundation when I got here, and I think I’ve improved a lot since then. We’ll see where I can take my game this season.”
The Steelers are counting on a huge step up for Allen, who started three games this past season, tallied 43 solo tackles, 10 pass breakups, two interceptions and three forced fumbles. The turnovers occurred when Allen had his most extensive playing time and were a shot in the arm for a defense that rarely forced mistakes by the opposition.
The Steelers are hopeful that Allen’s strong play can continue this season, but also that it’s infectious and permeates the entire defense. Sure, the pass defense is a major reason why the Steelers ranked No. 1 in total defense the past two seasons, but takeaways were at a minimum. After 11 interceptions in 2011, the defense had just 10 last year, but only six were by defensive backs.
Allen’s two interceptions were a team-high in the secondary, tied with Clark, and he secured them, the forced fumbles and one fumble recovery during his late-season starts at right cornerback for an injured Taylor. This year, Allen will start on the left side for Lewis, but he might move back into the slot when Gay comes onto the field as an additional defensive back.
“There’s no secret that we haven’t forced as many turnovers as we would like,” Gay said. “So, we’re working hard to try to improve in that area. (And) I don’t think it’s been determined where we’ll all play when we go to the nickel or the dime. I could move outside, and Cortez could go inside. We’ll see.”
Wherever the Steelers put Allen, he plans to make the most of the opportunity. A fourth-round pick from The Citadel, Allen didn’t take long to move past third-round draft pick Curtis Brown from Texas. Brown has had problems staying on the field due to injuries, and when he has had a chance it hasn’t paid off.
Allen has two seasons remaining on his rookie contract that was for $2.432 million and included nearly $400,000 in a signing bonus. His salary is $555,000 this season and $645,000 next season. Allen will be a free agent in 2015 if the Steelers do not sign him to a long-term contract before then.
Notes: The Steelers practiced at Heinz Field for 90 minutes Thursday, despite the rain, to end organized team activities this spring. … The offseason practice sessions conclude with mini-camp. Practices Tuesday and Wednesday are from 1:50-4 p.m. Thursday’s workout is scheduled to begin at 11:25, but it has ended early or canceled all together in recent years. … CB Justin King was placed on the Reserve/Injured List. The former Penn Stater joined the Steelers Dec. 18, 2012 and was inactive for the final two games last season. He was originally drafted by the St. Louis Rams in the fourth round (101st overall) during the 2008 NFL Draft. … Undrafted rookie free agent cornerback Nigel Malone was signed to take King’s roster spot. The Kansas State product spent time with the Colts earlier this offseason after signing with them this year.